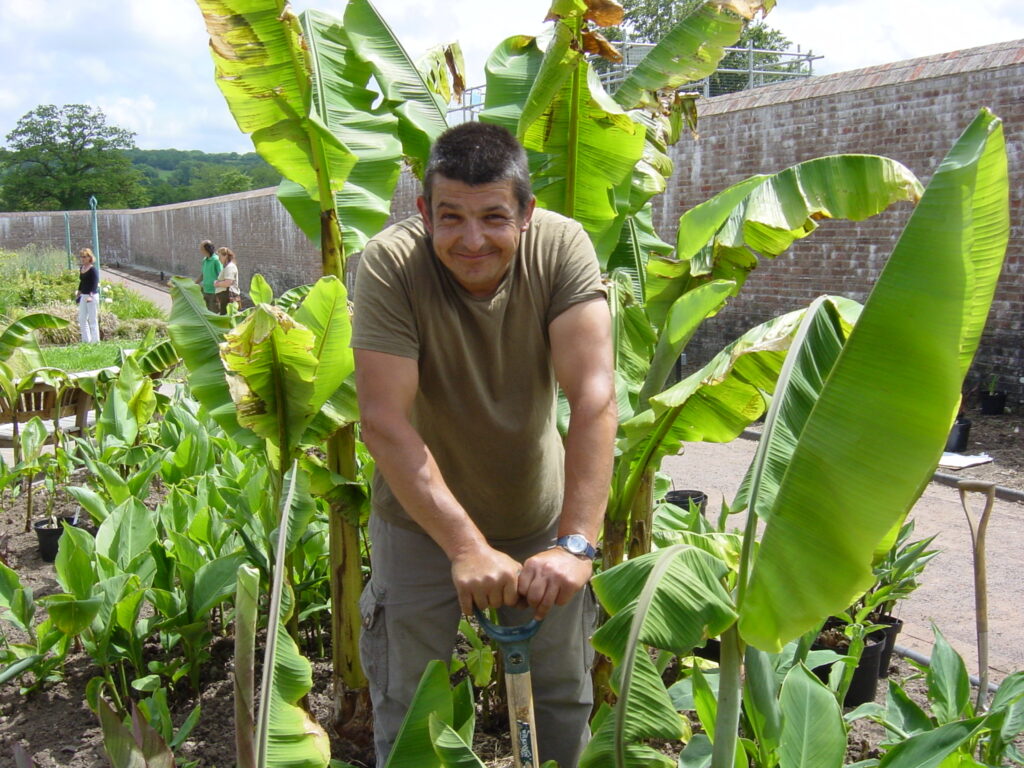 He started work here as a day release student gardener in June 1999 and has since become one of the more recognisable characters in the Garden. This is not only due to his character but because his ‘patch’ has largely been the Double Walled Garden, one of the Botanic Garden’s most visited sites. He’s been the Senior Horticulturist there for the past 10 years.

Where were you brought up Martin?

Winchester but I went to school on the Isle of Wight, I did a lot of sailing and little else.

How did you end up working at the Garden?

After a spell of working for the auctioneers Christie’s in London, working with pigs in Switzerland and as a postman in Romsey, I moved to Wales and did lots of different jobs, mainly on farms in the Upper Tywi valley, helping out with lambing and shearing.

It was under Tony Blair’s New Deal, and head of horticulture, Ivor Stokes, that landed me my first gardening job here at the Garden, helping out in what was then a small horticultural team of three. I was handy because I could drive a tractor. I also studied for a City and Guilds in Horticulture.

What was your first job here?

You’re most associated with the Double Walled Garden. When did you start to work in there?

After around 2003, just before it opened. I was given responsibility for the planting the monocots area of the Evolution of Flowering Plants display, in what we call Quad A. I had to learn about the APG system for classifying plant systematics and I’ve made big efforts to keep up with developments. Scientists are constantly updating plant family members, with the research into plant DNA and the discovery of new fossils. I still love working with monocots, they range from the weirdest to the exotic. Also, I have really enjoyed redesigning and planting the colour corridors in the Double Walled Garden. I try to keep the colour going through Spring, Summer and Autumn using mainly perennial cultivars. I think hard about the colour combinations and how some of the more rigid plants can support those around them so as not to use unsightly staking.

It’s probably Arisarum proboscideum, it looks like a dark purple mouse with a white tail, disappearing down a hole. I also love Dracunculus vulgaris. It has the most foul-smelling spathe to mimic rotting meat and attract blowflies for pollination. I have a personal interest in aroids and grow many at home.

Can you tell us something about yourself which may be a surprise?

I have a fascination for vintage water going vessels.