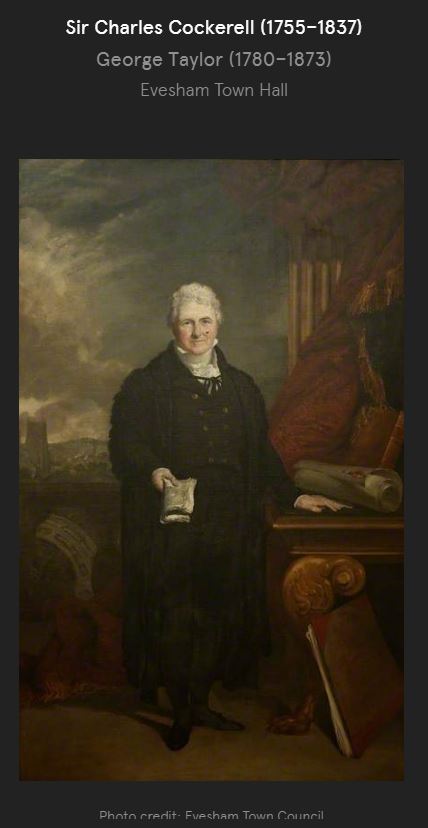 William Paxton and Charles Cockerell both had an eye for making money. Their collaboration made their agency house one of the most successful businesses in India in the late 18th Century.

Charles Cockerell arrived in India in 1776 as a writer in the Surveyors Office in Bengal. He quickly rose through the ranks of the East India Company (EIC) and became Postmaster General from 1784 – 1792. He then concentrated on his business interests in India, in particular the agency house he ran with William Paxton.

Charles was a great networker with friends in high places. These included the first Governor General of India, Warren Hastings, and Richard Wellesley, older brother of The Duke of Wellington. Wellesley later became Governor General and was notorious for his military expansion in India. The agency house of Paxton, Cockerell and Trail financed Wellesley’s campaign against Tipu Sultan in the Fourth Mysore War 1798-99. Charles was rewarded for this by Wellesley supporting Charles’s elevation to Baronetcy in 1809.

The Napoleonic Wars were raging in Europe. Britain and France were deadly enemies. Wellesley was first and foremost a soldier, not a diplomat. He wanted to rid India of every trace of French influence and for Britain to be the sole ruler of India, whatever the cost. It would not have occurred to Wellesley what the Indian population wanted. Tipu Sultan was the popular leader of Mysore and was sympathetic to the French. Wellesley would not tolerate this and wanted war. As EIC had to finance the war itself, Wellesley turned to Charles to help with this endeavour. The war ended with Tipu Sultan’s death at Srirangapatnam. Wellesley’s troops celebrated by running amok through the town, looting and committing atrocities on the population. These perpetrators went unpunished.

Charles returned to Britain in 1801 and kept his business ties with India, overseeing the British arm of the agency house. He was a stockholder in EIC and was Commissioner of the Board of Control in 1835 and 1837. Charles had various business interests in Britain including, along with William Paxton, directorship of The Gas, Light and Coke Company. Another of Charles’s business interests was the establishment of passenger ships travelling to India which were partly steam powered, making journeys faster.

Widowed after a brief marriage in India, Charles married Harriet Rushout in 1808, daughter of John Rushout, 1st Baron Northwick. This was Charles’s entry into the aristocracy, a path which many former EIC employees followed on their return. Known as nabobs, they were seen as a corrupting influence on society. Charles’s son later adopted his mother’s surname to distance himself from any societal taint. The other hallmarks of a typical nabob were purchasing a fine country house and a political career.

Charles became MP for Tregony in 1802. He stood for various constituencies over the years, mostly successfully, eventually becoming MP for Evesham in 1819 until his death in 1837.

Charles’s elder brother John was employed by EIC. After his return to England in 1794, John bought Sezincote, in Gloucestershire, an estate in a poor state of repair. He commissioned his brother, Samuel Pepys Cockerell, as architect for the renovations. John died in 1798 before the renovations were underway and bequeathed Sezincote to his siblings Charles, Samuel and Elizabeth, rather than his Indian wife.  Sadly, this often happened to Indian women. Charles bought out Samuel and Elizabeth and employed Samuel to finish the renovations in an oriental style, an influence later embraced by the Prince Regent’s Brighton Pavilion. Its style was different from other country houses Samuel designed, including Daylesford, Warren Hastings’s home and William Paxton’s Middleton Hall.

Flowerpot Podcast – The One with Helen Whitear