Natural historians, scientists and government agencies have made detailed records over this time, but they are not the only witnesses to this changing world. 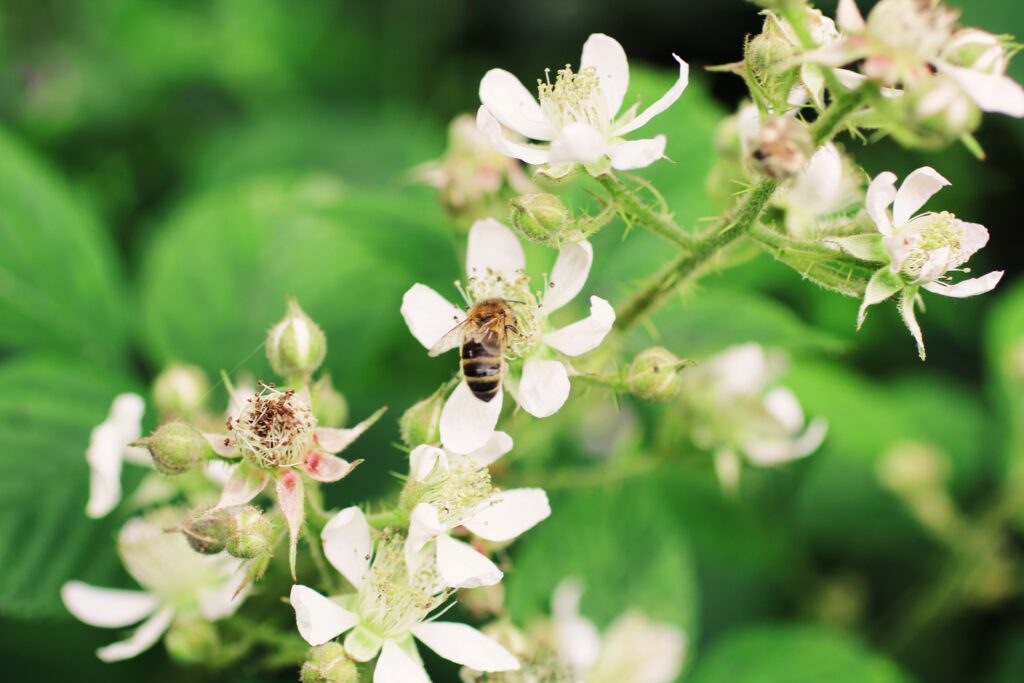 The last 65 years have been a period of profound change within the UK landscape. Agricultural intensification after the Second World War lead to a decline in species-rich grasslands and permanent pastures, while hedgerows and woodland were destroyed so that field sizes could increase, and new crops were grown. The distribution and abundance of the UK’s wildflowers has changed, with some species declining whilst new plants have been introduced. Natural historians, scientists and government agencies have made detailed records over this time, but they are not the only witnesses to this changing world.

Honeybees also travel through these landscapes, flying through fields and woodlands, over hedgerows and croplands, searching for nectar and pollen to return to their hives. Protein-rich pollen is used to feed developing larvae whilst nectar is passed from bee to bee, concentrated and refined to make honey, the honeybees’ energy store.

Pollen grains trapped within honey can provide a record of the plants the bees have visited. The pollen comes in different shapes and sizes, from large, spiky balls from dandelion, to small, smooth grains from grasses.

Microscopy can be used to identify pollen from its shape, while DNA within the pollen grains can provide a signature for the plants it came from. At the National Botanic Garden of Wales, we have been identifying the pollen within honey to find out which plants are important for the honeybees’ diet. We have compared results from 2017 to a study conducted in 1952 to reveal how honeybees have responded to the changing floral landscape of the UK. The results of this research are published in the journal Communications Biology.

Identifying the plants used by honeybees

For many years beekeepers and scientists have observed microscope slides of honey to reveal the diversity of plants honeybees visit. In 1952 A.S.C. Deans conducted a nationwide survey of honey plants. Beekeepers from throughout the UK sent 855 samples of honey from their hives and each was examined under the microscope, painstakingly identifying the pollen grains found within.

In 2017, Dr Laura Jones repeated A.S.C. Dean’s survey as part of her PhD research with the National Botanic Garden of Wales and Bangor University. She asked beekeepers from throughout the UK to send some of their honey and analysed 441 samples. This time, instead of using microscopy, the pollen was identified using a technique called DNA barcoding. DNA is extracted from the pollen, short DNA fragments are amplified and compared to the UK DNA barcode reference library, a resource that has been developed in a project led by the National Botanic Garden of Wales.

White clover declines in the landscape

In 1952 the most important plant for honeybees was white clover (Trifolium repens). These results make sense as white clover was widely acknowledged to be an important honey plant. In 1936, R.O.B. Manley wrote about white clover in his book “Honey Production in the British Isles”.

“Of the major honey plants the most important are found among the Leguminosae, and the outstanding clover, in fact the world’s most important honey plant is the common white clover. This plant is very familiar to all. It is to be seen in every meadow and beside almost every road and path, where it thrives upon the gritty soil”.

In 1945 F.N. Howes described the major honey plants of the UK in “Plants and Beekeeping”. He states:

“The clovers are the most important honey producing plants in Britain and are considered to account for about 75% of the yearly honey crop. White clover (T. repens) is by far the main producer among the different kinds of clover that are cultivated or occur in pastures.”

In 2017 white clover was still the second  most important plant but there was a significant reduction in its presence within the honey. In 1952 it was found in 93% of honey samples and was a major honey plant in 74% of these, but by 2017 it was found in 62% of samples and was a major source in only 31%. This likely reflects a reduction of white clover within the landscape. Exact records are not available for 1952, but the Countryside Survey for the UK shows that between 1978 and 2007 white clover decreased within the landscape by 13%.

White clover used to be a dominant plant within permanent pastures and was also often included in grass leys as a source of protein for livestock. Agricultural intensification led to a reduction in the amount of permanent pastures and increased use of inorganic nitrogen fertiliser meant that clover was less likely to be sown in grass leys. Reseeding without clover made it easier to control docks and thistles with a broad-spectrum herbicide that killed off all of the plants that were not grasses. Where white clover was still included in leys, much more regular cutting for silage meant that it was unlikely to be allowed to flower.

With the reduction of such an important nectar source, honeybees needed to find alternative supplies of nectar and pollen. Our results suggest that honeybees increased the amount of bramble, Rubus fruticosus in their diets. Bramble and white clover flower at similar times and bramble increased significantly as a major honeybee plant between 1952 and 2017. In 1952, Rubus was found in 58% of honey samples but was a major source in only 5% of these. Both Manley in 1936 and Howes in 1945 describe bramble as a ‘useful’ bee plant but Manley states that bramble honey “is never seen pure in this country” whilst Howes states that “pure blackberry honey is probably rarely obtained in Britain”. In 2017, bramble was found in 73% of honey samples and was a major honey plant in 36% of these.

In 1952 the genus Brassica, to which oilseed rape belongs, was a major plant in only 2% of honey samples, by 2017 this had increased to 21%. The presence of Brassica pollen within the honey was found to be significantly greater from hives found within 2 km of oil seed rape crops.

Honeybees make full use of the nectar and pollen from oilseed rape and single-origin oilseed rape honey is now widely available. It has a high glucose content that makes it granulate very rapidly into a set, white honey with a mild flavour. The rapid granulation can cause problems for the beekeeper as if it is not extracted rapidly from the combs it can set hard and be impossible to remove.

There is a sting in the tale of this new resource however, as oilseed rape seeds are often treated with neonicotinoid insecticides which harm honeybees. These neonic insecticides are currently banned within the UK and hopefully this ban will remain in place once we leave the EU.

The emergence of an invasive plant: Himalayan Balsam

The honeybees in their search for nectar and pollen have also tracked the emergence of an invasive species. Himalayan Balsam (Impatiens glandulifera) was first introduced into the UK in 1839. Its fast-growing stature (up to 3 m tall), orchid-like flowers in shades of white, pink and purple, and exploding seed pods, appealed to Victorian gardeners. Himalayan Balsam soon made its escape from the garden walls, first spreading slowly, then increasing more rapidly from the 1940s to the 1960s, gradually establishing along waterways and field margins.

In 1945 Howes noted the appearance of this new plant as “An interesting Himalayan balsam which is often cultivated and is now naturalised in some parts of the country, appears to be a good bee plant”. In 1952 it was present within UK honey at low levels, occurring in 3% of samples with only 1% as a major plant.

The pace of its spread continued to increase over the following decades and Himalayan Balsam now rampages along riversides and road verges. In 2017 it was found within 15% of samples and was a major source in 6%. However, this is an under estimation of its importance, since most of the honey samples were provided in July and August, whilst Himalayan Balsam tends to be used by honeybees later in the year.

Himalayan Balsam is now an important late season plant for honeybees, providing an abundant nectar source at a time of year when there is little else available. It helps the bees build up their winter stores and is sometimes sold by beekeepers as a single-origin straw-coloured honey with a sweet, fragrant, floral taste. It is easy to tell when honeybees are foraging on Himalayan Balsam as they return to the hive with a characteristic whitewash of pollen covering their bodies, leading them to be called ‘ghost bees’.

Himalayan Balsam is undoubtedly a good plant for honeybees but this is a controversial issue as it is a highly invasive species listed under Schedule 9 of the Wildlife and Countryside Act 1981, making it an offence to plant or cause this species to grow in the wild. Its vigorous growth means it competes with native plants for light, nutrients and space. It dies back in winter leaving riverbanks bare and open to erosion whilst its dead stems and leaves can block waterways. Even its popularity with pollinators can cause problems, as it can outcompete native wildflowers for their services, leading to reduced seed production in native plants.

How can we improve the lives of honeybees and wild pollinators?

Honeybees and wild pollinators need abundant and diverse sources of nectar and pollen within the landscape, to provide sufficient, high-quality food. By understanding which plants are the most important sources we can provide recommendations on which plants to grow so that honeybees and wild pollinators can thrive. In 2017, bramble, white clover and Brassica were the top three plants for honeybees. The next most important plants were spring-flowering shrubs and trees, including hawthorn (Cratageus monogyna), apple (Malus species), Cotoneaster species, sycamore and maples (Acer species) and cherries and plums (Prunus species). Towards the end of the season, heather (Calluna vulgaris) was an important honey plant, along with the invasive Himalayan Balsam.

Landscape level changes are required to provide more floral resources. The UK needs more flower-filled hedgerows with bramble margins and grasslands rich in wildflowers. The conservation of remaining species-rich meadows is a priority, but the area that these habitats cover is vanishingly small. To make the biggest gains in nectar and pollen, changes are needed in the most prevalent habitat in the UK today, the ‘improved grasslands’. The title ‘improved’ is a misleading term, it means the grassland has generally been ploughed and reseeded, treated with inorganic fertilisers and herbicides. Wildflowers are squeezed out to create grasslands dominated by a small number of grass species, where there are very few flowers to sustain pollinators. But because of the scale of this habitat, small changes here could vastly increase nectar resource. For honeybees providing more white clover in improved grasslands would be best, for other pollinators different flowers are more important.

At the National Botanic Garden of Wales our research continues. Along with our honeybee research we are investigating the plants used by hoverflies, bumblebees and solitary bees. Our research is gradually growing to provide an evidence-based floral information resource to help us plan a better future for all of our pollinating insects.

BIOSCAN at the Botanic Garden