A packet of cough lozenges leads Bob to discover a link between the Great Caruso and a pharmacy in Carmarthen. 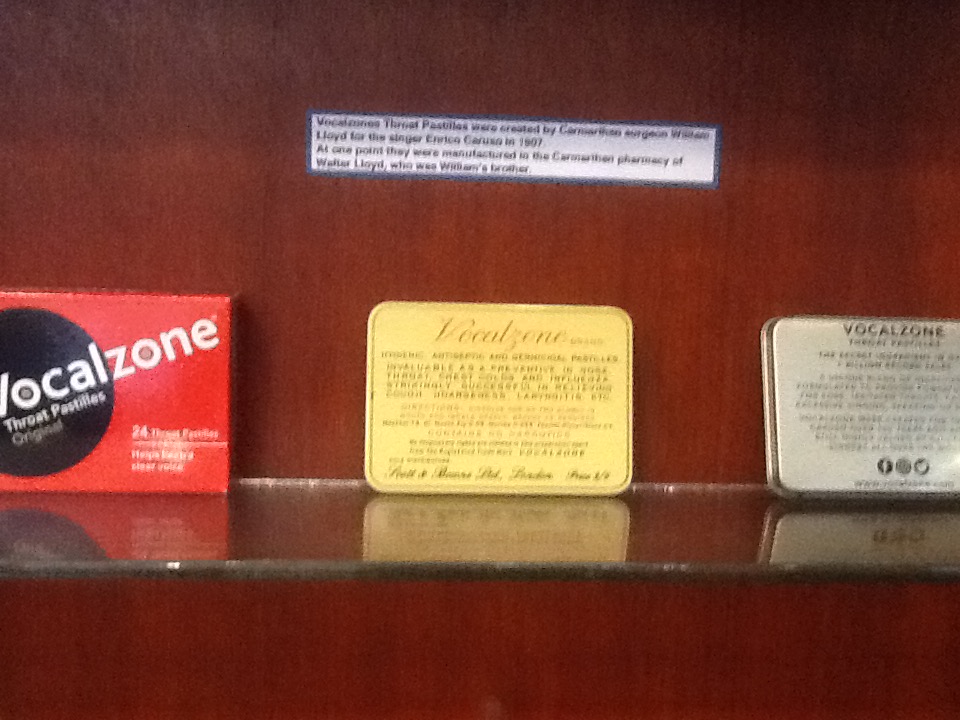 Some time ago I bought some pharmacy labels on EBay relating to  Walter Lloyd’ s chemist shop in Carmarthen – I am always on the lookout for Welsh based chemist labels.

I was delighted when recently the seller, Peter Morgan,  who had once ran the chemists shop , popped in to see me at the Botanic Garden.  He suggested that I get in touch with the company that makes throat and cough lozenges called “Vocalzones”.

From my talk with Peter, and from the “Vocalzones” site I discovered something that I thought would be worthy of being referred to in the Apothecary’s Hall.

William Lloyd, born 1872 in the Mansel Arms , Carmarthen, became a senior surgeon in London.  He still managed time for one of his favourite sports and was a reserve player for Wales rugby team.

Around 1907 he became friends with the Italian Opera singer Enrico Caruso, having treated the singer for a sore throat whilst he was at Covent Garden. The active ingredients for his medicine were liquorice, Menthol, Peppermint, and Myrrh ( the latter is a favourite of mine,  its uses in medicine are now greatly undervalued).

At one point the lozenges were manufactured in the Carmarthen pharmacy of Walter Lloyd, who was William’s brother.

I contacted Vocalzones and was extremely pleased to get a message back offering me some bits and pieces for the Apothecary’ s shop.

These were a couple of replica tins,  and two modern packets contain the actual lozenges.

The two tins plus one of the modern packets are now on display in the Apothecary Hall. ( by baby scales, top right)

The remaining packet I gave to a very good friend , Bethan Rose Mansell,  who is busy carving a new career as a very talented musical entertainer,  and swears by Vocalzones. They were really helpful to her a couple of weeks before Christmas when a bad throat developed.

(Interesting surname I think, in view of where William Lloyd was born)

Here’s a short clip of Bethan singing “Nine to Five”

This Edwardian pharmacy, packed full of medicinal memorabilia, is highly popular with visitors

Apothecary Anecdotes: Doctor Quicksilver, a castaway and an English pub with a Welsh name