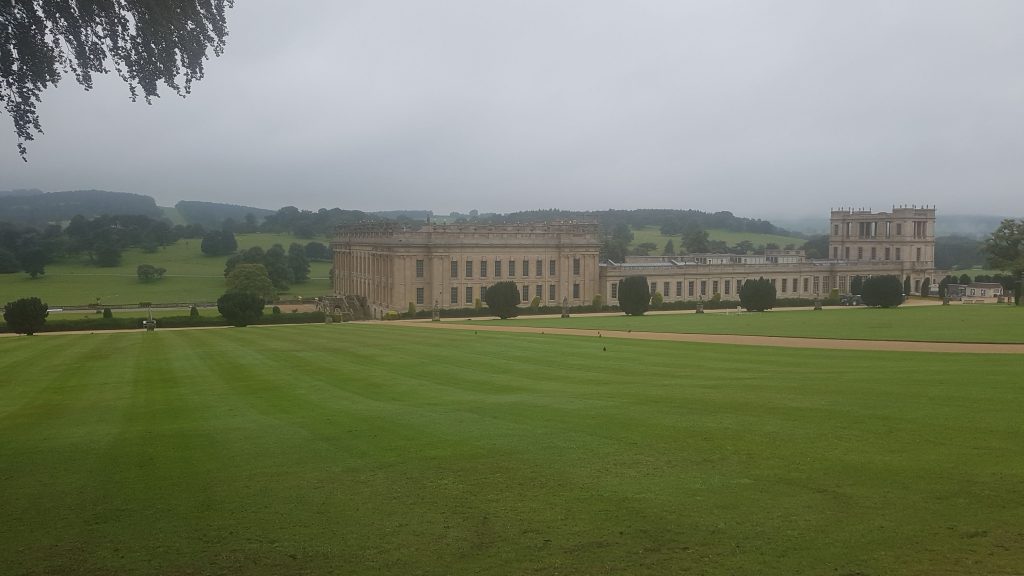 The main lawns leading to the house Creative Commons - Attribution (BY): Molly Sheppard

As a horticultural apprentice, Molly Sheppard gets to spend time in other gardens to learn new skills and to see how other places do things. This is her diary from a week-long placement in Chatsworth Estate in Derbyshire.

Sunday: After a long and chaotic train journey from South Wales to Matlock I was picked up by
Mick Brown and taken to Chatsworth Estate. After showing me to my flat in the Stable Block,
Mick gave me a buggy tour of the Chatsworth Gardens including the wider estate.

I was keen to find out more about the impressive history behind the garden and grounds which are a mix of
18th to 21st-century styles, like water features and large lawns which sometimes clash with the
more naturalistic woodland areas.

I was drawn to the kitchen garden because of its colourful array of plants and its unique layout and the vinery because of the uniformity of the plants and fruits. I was surprised to find out that little propagation is done onsite.

Monday: I began with a health and safety induction with Mick who was keen to check that I felt
comfortable and had all the equipment I needed. I started by watering in the vinery and the
Third Duke’s display glasshouses. Then I went to a small external garden owned by Chatsworth
which is used for excess cut flowers and growing on smaller plants before they are ready to be
used in displays. Here I potted up some Hesperantha which had recently been removed from a
display in the garden. I helped cut flowers in this garden and prep them for use in floristry. I was
interested to see how the floristry department was run as I had not worked with cut flowers
previously.

Tuesday: The day began with Becky in the cut flower section of the kitchen garden when I
worked with Chrysanthemums. I had to remove the tips of each plant at about 6 or 7 inches high
and leave only four buds remaining as this would encourage the growth of long-stemmed
flowers rather than a short shrubby formation (bad for cut flowers). I also worked on a bed
removing old dead material and weeds to make it more visibly appealing. After lunch, I worked
with Glen in the vegetable production section cutting back potato foliage that had been affected
by blight to prevent it from spreading. I also cut back mint that had begun to flower and sowed
radishes and cabbage into a cold frame. I thoroughly enjoyed today and I would like to work in
the kitchen garden again.

It was interesting to learn more about how most plants were chosen by the Duke and Dutchess rather than the horticulture team.

Wednesday: I worked with the Pleasure Grounds team, who maintain the rock garden and the
general estate, to remove overgrown ivy on a bank so that a new design could be planted up.
We managed to remove most of the ivy foliage but the bank would need re-digging to remove
the roots. It began to heavily rain and the bank became slippery so we had to stop. To keep out
of the rain I helped clean and sharpen all the shears, loppers, hoes and other tools in the shed.

Thursday: The weather was better so I went with the Pleasure Grounds team to continue
working on the bank. We used mattocks and spades to dig out the ivy roots which all went to the
skip. When this job was completed I went into the Duke and Dutchess’s private garden to
replant some catmint that had been removed a few days earlier to allow for work to be done on
the wall. Because the wall was very old I had to wear a hard hat.

The views from this garden were incredible and I was surprised to learn that landscape wasn’t natural as it had been designed by Capability Brown in the 18th Century.

After lunch, I worked in the tropical borders by the maze weeding and deadheading.

Friday: To learn more about the history of Chatsworth I was given a tour of Chatsworth House.
My favourite room was the Green Satin Room as this contained paintings of the landscape and
showed how the garden had changed throughout the years. To finish my week I worked with the
Floristry team, learning the basic of making bouquets. I made some bouquets of roses to be
sold at the farm shop and a few table decorations.

I thoroughly enjoyed my placement week and would love to go back to Chatsworth again. I will
keep in touch with the horticulture team and hopefully visit to see the progress of their ongoing
projects.