Botanic Garden beekeeper Lynda Christie discovers that, when it comes to honeybees, one plus one equals four! 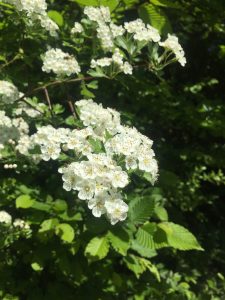 Another beautiful afternoon at the Botanic Garden’s Apiaries.
It was a bit chilly first thing but, by midday, it was 16 degrees Celsius with bright sunshine. That will do nicely for our inspections.
The pollinators were all out today foraging in the Apiary gardens and surrounding Botanic Garden areas. There are bumblebees on the comfrey and vetch in the wild garden; hoverflies on the hawthorn; honeybees on the euphorbia and birdsfoot trefoil – it really is a smörgåsbord of delights in flower for the pollinators to munch on. 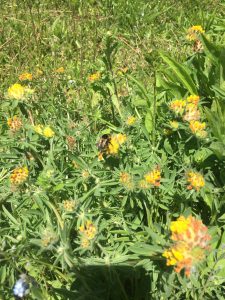 Mid-May is the time in the beekeeping year that the bees usually start to make preparations for making increase.
With a bit of experience and planning, the beekeeper hopes to pre-empt the bees and use swarm-control methods and management of the hives to control the divisions of colonies.
It is so nice when it all goes to plan. Yay!
Two colonies – one in the teaching apiary and one in the National Nature Reserve – that I have been preparing for division, have done their work.
They have drawn out comb and the queen has laid plenty of eggs so they have lots of brood. 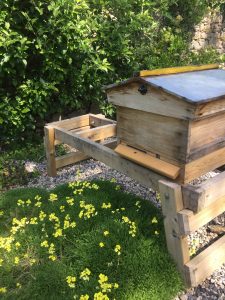 They were given double brood boxes to draw out in preparation of splitting and today, on inspection, there were signs of queen cups just starting to be made – just the right time to split the colonies into two. So two hives became four!
Now, the next couple of weeks’ inspections will show if it has worked. I will be looking to see that the original queens and colonies have lost the urgency to swarm and settle down to business as usual.
The queenless colonies will, hopefully, draw out new queen cells. I can choose to cull these down to one per colony to distract them from swarming and raise a single queen or harvest the queen cells to make up further small nucleus colonies to bring on through the season. Happy days!
Still some way to go, but this is what makes beekeeping fun!