Waun Las National Nature Reserve lies adjacent to the north and east side of the formal Garden area.

Here you may come across a range of wild plants, fungi and wildlife that have disappeared from much of our countryside.

This is because we manage our land to encourage biodiversity whilst also running a commercially viable farm.

Occupying over 150 hectares of Carmarthenshire countryside, it has been managed as an organic farm since the late 1990s. It contains a wide range of valuable habitats including rhos pasture, wet woodland and lowland meadows – priorities for conservation in the UK and the rest of Europe. It’s also a landscape of hidden secrets – the  NNR is sited on the late 18th century Middleton Estate, which itself was built over the remains of a 17th century estate.

In 2014 the farm operation entered into a Glastir sustainable land management agreement with the Welsh Government.

Our Volunteer Conservation team helps us to monitor wildlife on site and they enter their recordings onto IRecord.

Having gradually created two species-rich hay meadows over 15-20 years, we moved a green hay crop from these meadows to two others in 2017. This accelerated  creation of new hay meadows has been a spectacular success – see the blogs to find out more.

How do you get Waun Las National Nature Reserve?

Access is via the Garden’s main Gatehouse entrance. It’s about a 10 minute walk, alongside our restored lakes, to the start of the NNR.

We’ve created a network of paths across the whole reserve but due to a major restoration project top restore three of our lakes, only the blue route is open in 2020.  You’ll need stout footwear as it can get quite muddy and uneven in places – this also means that wheelchair access is restricted to the flat path section between numbers 1 and 2 on the map below.

Along the paths, you’ll come across interpretation signs that tell you about how we farm and manage woodland to encourage biodiversity. 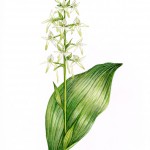 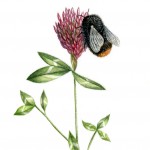 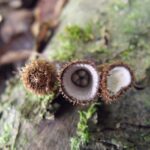