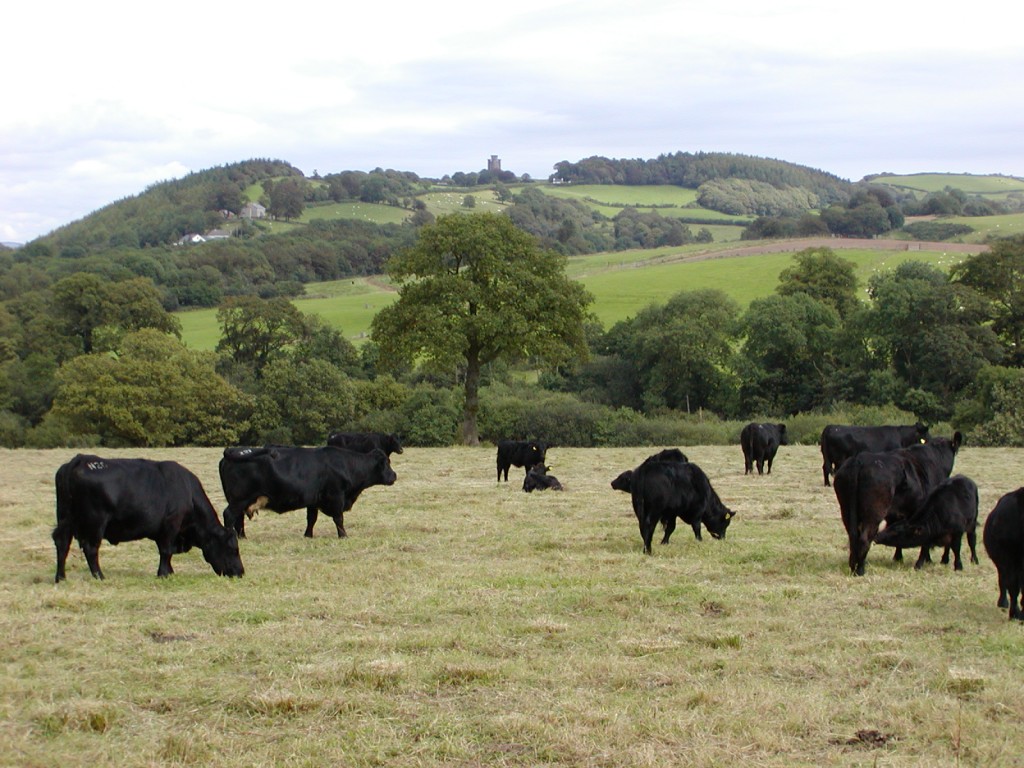 The Botanic Garden covers about 568 acres[1] of which farmland is some 316 acres with 100 acres of woodland. With 25 head of pedigree Welsh Black beef cows and 30 non-pedigree Balwen ewes replacing the 300 Lleyn ewes of previous years, the permanent flower rich grassland of the Waun Las National Nature Reserve is grazed and cut for hay. This season’s lambs will be finished[2] on grass and sold in the early Autumn, but the 2018 born calves will be reared and kept over-Winter and sold in early 2020 when 2-3 years old and about 450kg dressed carcase weight[3]

The Estate Manager Huw Jones, manages this commercial unit, called variously Pantwgan Farm, Botanic Garden Farm, Middleton Hall Estate Farm, but below as just The Farm. Visitors sometimes ask why the Botanic Garden keeps commercial livestock, the query often coming from people who are vegetarian/vegan or who think that keeping domestic livestock like cattle and sheep is not the right thing to do. So why does Botanic Garden keep cattle and sheep? Because if there were no livestock grazing the meadows and grassland of the Garden and the Reserve, these fields would rapidly scrub over with Bramble, Ash, Sycamore and Blackthorn invading the grass area from hedges and seeds being dropped by passing birds. Within a few years these fields would be scrubbed over and within 20 years would be secondary woodland. So, if no livestock grazing then no more wildflower rich grassland. After all, the only reason these grasslands exist at all is because over the past centuries, the grazing of cattle and sheep and horses, helped by farmers of course, have cleared woodland and scrub and allowed the grasses and wildflowers to thrive on the exposure to sunlight rather than the darkness within a wood.

April was the ‘yellow time of the year’ with Daffodil, Primrose, Common Celandine and Dandelion flowering away, reflecting perhaps the sun’s colour and warmth, mixed with the small white Bellis Daisies and with tiny Wild Strawberries on field edges. Some yellow still of course in May, but the legume Gorse’s yellow flower is seen in every month of the year. May is really the ‘red, white and blue’ month. Red from the Early Purple Orchid in hedges and woodland edges and from the dioecious[4] Red Campion although this should be called Pink Campion shouldn’t it? The white of May is the hedgerows lined with Cow Parsley, the Stitchworts, Garlic Mustard, and woodland with Wild Garlic [Ramsons] and Wood Anemone and of course the seed head of the Dandelion. Can you remember as a kid picking a Dandelion seed head [known as a Blowball or Clock] to tell the time and with your breath blowing the seeds away into the wind? One hour for each blow so: one o’clock, two o’clock, three o’clock etc.  The blue is also woodland with Bluebell a major feature.

Although the cold and wind of the ‘Beast from the East’ delayed all plant growth this year and grass of The Farm’s permanent grassland was ‘scoured off’ by that cold easterly wind, it has rapidly caught up. The month of May is considered by farmers to produce the best quality grass; quality being the amount of energy in the leaf and the amount of leaf on the plant. Grass leaves are more energy rich than stem anyway and as soon as grass flower heads are being produced then plant quality reduces. Grass quality depends mainly on grass age and the amount of sun received by the plant: as sun absorbed = energy stored in plant.

Many grasses are flowering now or getting ready to flower, with Cocksfoot, Sweet Vernal Grass and Annual Meadow Grass of course with Crested Dogs-tail just starting . But more about grasses in June and July when grass flowering will reach its peak.

More about this in later months.

ARABLE: After ploughing and cultivating, Huw’s contractors have already sown 7 acres of a mixture of peas and oats for arable silage for harvest as silage in August to make a protein and energy rich feed for housed livestock next Winter. More about silage, haylage and hay next month! Also sown has been 4 acres of Malting Barley – after harvest, the grain will be sold for gin production by a local distillery and the straw used for bedding over Winter. These fields of Cae Circus and Cae Gors can easily be seen from the observation point in front of Principality House.

BEEF CATTLE: In a late season like this one has been, farmers just hope that the grass growth will catch up with the appetites of their livestock. The Farm’s Welsh Black cows have now recovered from calving and Huw has cows and calves grazing the sweet spring grass. This is the frisky time of year and cows are deeply protective of their young calves; so if you are walking the fields make sure that you give the cows a wide berth and never walk between a cow and its calf as neither will like it that much!

LAMBS & LAMBING: The Balwen Welsh Mountain sheep on The Farm are a small but very hardy breed. They are easy to manage, having few of the health problems associated with many of today’s larger breeds of sheep. They have excellent feet, requiring very little attention, and can get by with only a minimum of supplementary feeding at peak times of the year which is why The Farm has chosen to keep this breed, rather than one of the more demanding larger sheep breeds. The Balwen sheep breed originates from one small area of Wales – the Tywi Valley – where the Botanic Garden is sited.

Huw says that lambing the Balwen sheep was straightforward as they mainly did it themselves without any help. Nevertheless, for lambs everywhere it’s the time for frivolous running around and behaving like small children during playtime at school; all this while every ewe focuses on grazing new grass to produce the milk that the growing lambs still demand every one-half hour or so by taking the teat into the mouth and butting upwards into mother’s udder to stimulate milk ‘let-down’. It’s a hard life for mothers isn’t it!

Finished lambs ready for slaughter are fetching very good prices just now; reflecting lower numbers coming forward to market due to the difficult early lambing season. This price volatility is typical of sheep farming and in fact all other livestock and arable crops as well; with farmers never knowing what their lambs born in March will fetch when taken to market in July.

A season’s lateness affects all of nature and the trees and hedges are only now beginning to catch up. Blackthorn’s white flowers are always the earliest and have been and gone. Birds have been courting since last month, have made nests and although some are sitting on clutches of eggs some others including Jackdaw and Blue Tit have been seed feeding fledglings. Wrens have been seen in the car parks flitting about like wrens do; no doubt feeing youngsters in their nests in some secret place in the wood or hedge. Chiff-chaffs are chiff-chaffing away in field edges from early this month and their sound will get stronger and more distinct as the season progresses.

Hedges are always the mainstay of the natural world on a farm, all that wildflower vegetation at the base, and resting, nesting and security for birds and small mammals both above and below ground. They are also valuable for grazing livestock to shelter from the wind. It may have been the warmest April since the 1940s, but some trees are still behind with their leafing this season. With this delay in leafing it has not been easy to determine what the summer weather holds for us. After all, before the BBC’s 24-hour weather service, we all had to rely upon local wisdom to tell us what the future weather had in store for us: ‘Red sky at night- shepherd’s delight; red sky in the morning – shepherd’s warning’ and my favourite ‘If it’s ASH leaves before OAK then we’re in for a soak, but if it’s OAK leaves before Ash then we’re in for a splash’. We do know now with Ash leafing seriously delayed this year that we’re in for a SPLASH this Summer!

LOOKING FORWARD to the end of May when all the colours of the rainbow can be found in wildflowers.   Yellow becomes frequent again with Ragwort, St John’s Wort and the Buttercup that I like even though it is of not much value to us farmers; more of that next month.

[1] An acre was defined in the Middle Ages as the area of land that a yoke or pair of oxen could plough in one day. This works out as 4840 sq. yards or about 70 yards x 70 yards; and a professional football pitch and the land around it is about 2 acres.  A hectare is 2.47 acres.

[2] Finishing or fattening sheep and beef cattle is the process of ensuring that feed is provided so that growth rate is maintained but the lamb or beef animal does not merely gain weight as fat.  Consumers don’t like too much fat on a joint!  Many farmers like to finish lambs and cattle on a cheap grass diet – as Huw does on The Farm – rather than feeding expensive bought in cereal-based food.

[3] Dressed Carcase Weight [DCW] is the weight of an animal after being partially butchered, all the internal organs and usually the head removed, as well as the inedible [or less desirable] portions of the tail and legs.

[4] A Dioecious species is one in which separate plants are either male or female and not with both on the same plant like so many other species. Can you think of any other dioecious plants?

[5] A conventional farm typically uses the inorganic fertiliser bought in bags, pesticides, antibiotics and a wide range of medicines to control internal and external parasites of livestock, that a registered organic farm does not use.