Our performance stage is a great place to watch music, see a play or join in with family activities

Much of it was by done by students from Coleg Sir Gâr and The Prince of Wales Building Craft Apprentice Scheme – young stonemasons, bricklayers, roofers and carpenters. A young blacksmith made the pineapple on top.

They then came to the Garden for a week, producing designs for nine potential different buildings here.   This performance stage was chosen as the best of these designs by an audience made up of Garden staff, volunteers, Prince’s Foundation students and supervisors, and members of the local community. 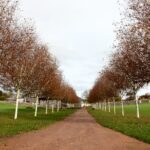