Having been an Apprentice with the Regency Project at the Botanic Gardens for 8 weeks, I felt the need to explore new areas of our gardens. The variety within the garden is extensive with many different departments to have a look at. But, I quickly found myself taking up an interest in Fungi and Lichen through spending time walking through our Parkland and spotting various Waxcaps growing mostly in the Faerie Woods. But, my curiosity for Fungi initially formed whilst watching the National Geographic documentary on luminous mushroom. If you haven’t yet seen it, it’s worth a look – https://www.youtube.com/watch?v=tOM6QJCK8Lg

I also think fungi are a bit weird, there’s so many facets to the Fungi Kingdom. Their aesthetic differs depending on the species and some even morph colour (Parrot Waxcap, Gliophorus Psittacinus), some are able to provide medicinal properties used in treatment for cancer or diseases and then there is a largely historical provenance to fungi in Eastern culture with some traditions being Westernised, Kombucha Tea and Mushroom teas for example. Some mushrooms you can and then some will kill you. So, it’s fair to say that fungi are a lot more interesting and wide-spread than just the chestnut mushroom sitting on your plate.
So, once I’d heard that Growing the Future was planning a “Getting to Know your Garden Fungi” course, I booked a place wanting to learn more about fungi growing here in Wales and across the UK.

The course was ran by Bruce Langridge, Head of Interpretation here at the Botanic Gardens but also revered as a Fungi buff and originator of the UK Fungus Day.
The course was divided into two sections, the first being a classroom led discussion where our group were informed on the many types of fungi, both the scientific and common names for differing species and ways of identification mushroom broken down into Fungal Forms as identifying features, i.e caps, gills, stem and gill attachments. We also learnt about 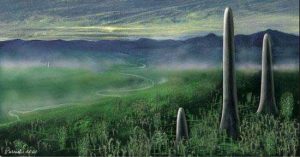 the extensive history of fungi beginning with the Late Devonian period, Prototaxities, giant fungal structures growing to be up to 26ft in height and culminating at the present day evolution of fungi, with there now being over 80,000 species across the world and 15,000 in the UK!

Having just had spent the first part of the day learning about fungi, it was now time to head out and see if we could find any interesting species to identify. Starting at the gardens carpark, Bruce was quick to point out several mushroom growing in the least likely of places, virtually beneath cars. Whilst there were some more experienced members of the group, all of what I’d learnt with the course was still presented in a way that anyone could understand the process of identifying. During our walk, Bruce also pointed out the tree fungal disease growing conveniently right above my head, Witches Broom that happens to only grow on Birch Trees.

Now making or way past, we made our way into Faerie woods where the majority of the fungi we saw were. The GTF “Getting to Know Your Garden Fungi” course was great. I’m still a novice by far, but having completed the course, I’ve definitely developed a heightened appreciation and knowledge for fungi and now know about identification of Waxcaps, especially!