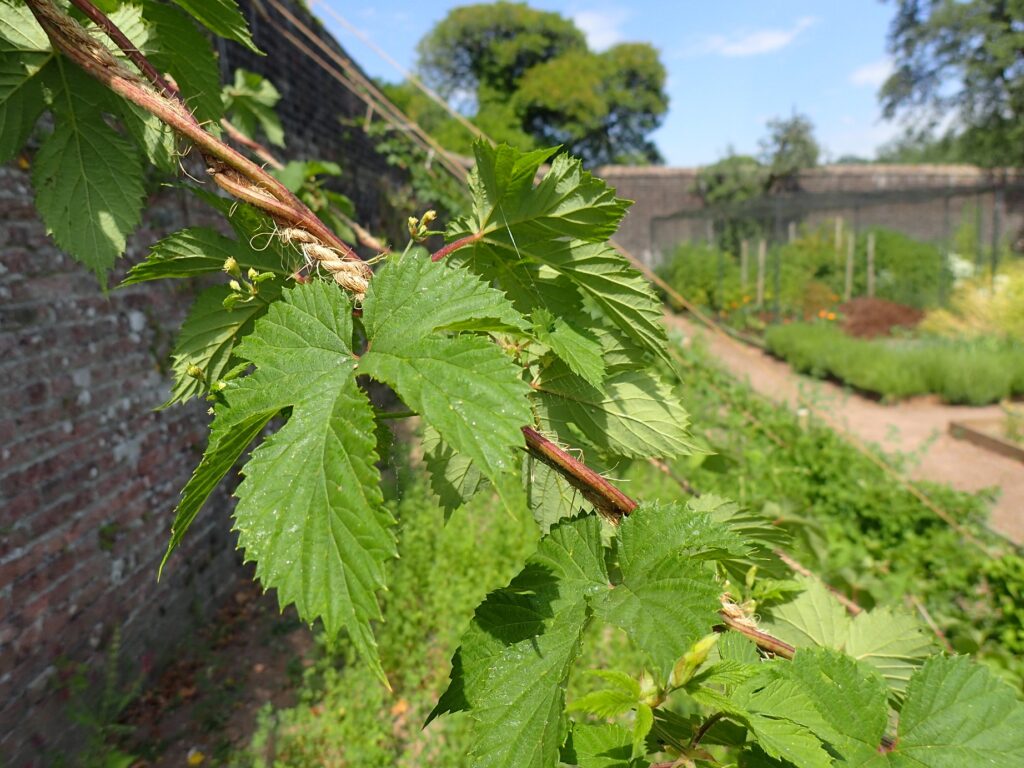 Anyone who has walked in the Inner Walled Garden in the last three months might have wondered at the rather nautical style structures attached to the wall that runs adjacent to the romantic ruin of the old peach house.

Not an attempt at building hammocks for the weary workforce to take a quiet nap but the start of an altogether new venture into hop growing and the promise of fine ale.

The hop plant, Humulus lupulus, is a herbaceous perennial climber that can grow to over 5 metres and has been in cultivation in Kent since the fifteenth century. Our taste for  ‘ hopped ‘ ale grew through the following centuries and by the mid-nineteenth century, the plant was grown on over 77,000 acres throughout the United Kingdom.

So…’ what exactly is a hop?’ you might well ask.

The plant is dioecious and bears male and female flowers on separate plants. The female flower or cone is what we need for the flavouring of beer: among their papery petals are glands that secrete the oily resin lupulin. This imparts bitterness, aroma and flavour to our pint.  In the Walled Garden are fifteen female plants obtained through a reputable hop nursery.  The five varieties have distinctive characteristics with terms like molasses, spicy, citrus, herbal, floral and chocolate used to describe their attributes and I am sure that as with grape vines the soil and conditions here in Carmarthenshire will contribute something of their own to the finished product.

However, as with all horticulture, there is cautious optimism and fingers crossed as we keep a vigilant eye out for signs of mildew or, worse, aphids that can spoil a crop in a number of days if unchecked. Good husbandry will have its reward…straight glass or handle?