Lynda Christie, Ecosystems Trainer for the Growing the Future project, has worked at the National Botanic Garden of Wales for over 10 years, and designs and delivers all of the project’s beekeeping courses 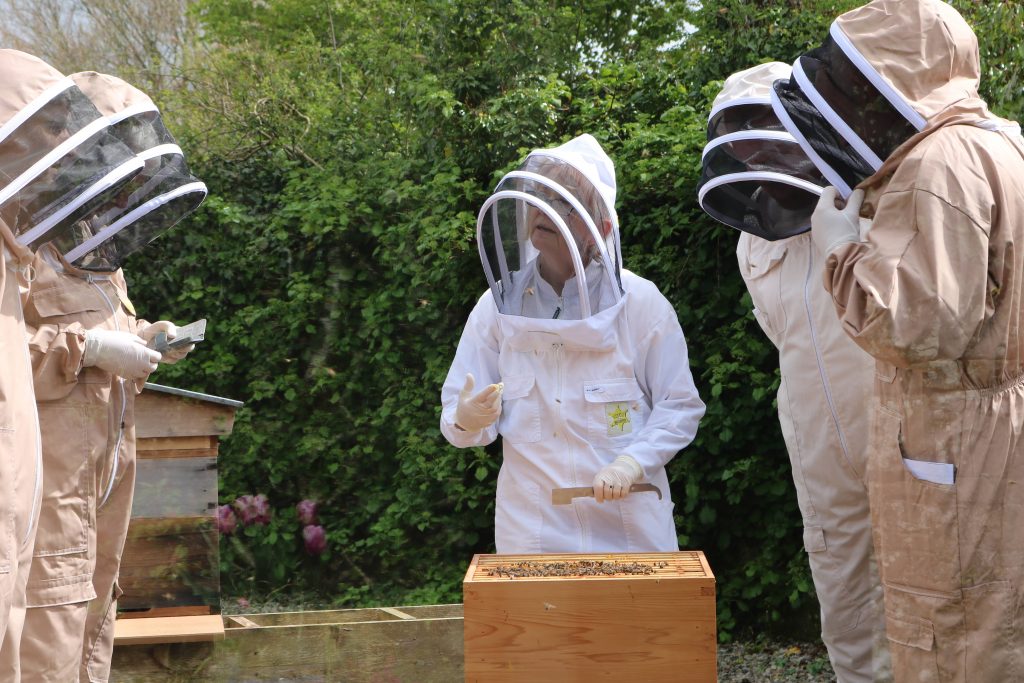 Lynda Christie, Ecosystems Trainer for the Growing the Future project, has worked at the National Botanic Garden of Wales for over 10 years, a place she originally hoped to work at to have an opportunity of working with their honeybees and Bee Garden.

As Ecosystems Trainer, Lynda designs and delivers all of the project’s beekeeping courses which include introduction to beekeeping courses, bee garden cosmetics courses and more in-depth five-week theory and practical sessions.  Work is well underway, with a variety of courses having been delivered at the National Botanic Garden over the summer, with five-week theory sessions planned to start at the end of October.

This wasn’t Lynda’s first job at the Garden however, as she initially started working in the Garden’s visitor entrance, the Gatehouse, before moving to work as finance officer in the Garden’s busy finance department.  Lynda helped as a volunteer in the bee garden for most of this time, working under an independent beekeeper.  During the pilot stage of the Growing the Future project, almost four years ago, Lynda took over as the Garden’s head beekeeper, where she oversaw the reinterpretation and redevelopment of the Bee Garden, made possible by funding from the project.  Now, her trusted team of beekeeping volunteers carefully help maintain the Bee Garden, to ensure the best possible experience for visitors and course participants.

As well as the continual work to maintain the hives and the garden, Lynda has also overseen the expansion of the Garden’s beekeeping ability, with another apiary added on the outskirts of the Garden, one she hopes will have the facility to rear new Queens.

So, how did Lynda get into beekeeping?  It all started with a talk one evening by a local beekeeper in 2001.

“I’ve always been a keen gardener, and I’ve redone the garden in every house I’ve owned, as well as being a member of local horticultural societies.”

The beekeeping talk inspired Lynda to join a local beekeeping association and since then, it’s the only hobby that’s kept her interest year after year – no beekeeping year is ever the same and there’s always something new to learn.  Lynda also sees how diverse beekeeping can be and the many different directions it can be taken, while the main emphasis is always on the bees and their well-being.

“Now that we have the second phase of the Growing the Future project, with more resources available, our bee courses can be developed more than ever before.  We’ve already designed and started delivering our Bee Garden Cosmetics Courses, with plans to develop beeswax candles courses later in the year.  We’re also working closely with the Garden’s Science Department and their PhD research to look at pollinators, their behaviour, and their conservation.”

We have had a busy season in the apiary so far, the long and drawn-out winter and the colder summer last year has meant the bees have had to be checked regularly to ensure they have enough food.  The spring inspections had to be done later due to the late start of spring, with a couple of losses found.  However, as a whole, many of the colonies have come through well and have picked up nicely, which has resulted in a reasonable honey harvest.  Lynda and her team also identified a colony for queen-rearing, and have successfully made a number of new colonies to add to the apiary.

Work carried out by Lynda and her volunteer beekeeping team include weekly apiary inspections and general maintenance, including keeping the garden clean and tidy, all equipment maintained, attending many internal and external public engagement events and even painting yellow bees on the paths leading to the Bee Garden, directing visitors to it.

The National Botanic Garden’s Bee Garden has a special Sentinel Apiary status, which means that debris samples from the hives gets sent to the National Bee Unit (NBU) for analysis, which will identify any pests, diseases etc.  These samples are sent throughout the season, as well as samples being sent for PhD research.  One other thing Lynda’s keen to achieve through her work engaging with visitors and course attendees is to raise awareness of the Asian Hornet, which poses a real threat to our native species of bees.  She says the NBU has an information leaflet to show people what this species looks like and actions to be taken if they’re spotted, which includes alerting the NBU who will deal with them.  It’s also important not to confuse an Asian Hornet for a European one.

Lynda is keen to interact with Garden visitors as often as possible, and is always happy to answer questions and give advice on all sorts of pollinating insects and swarms.  She’s keen to protect these pollinators as the work done by them for our environment is so important.

It’s not only those who attend Lynda’s courses that benefit from her knowledge and expertise, Lynda has trained many people within the Garden.  All of the Garden’s science students who study their PhD’s or placement years here get trained on how to handle bees, along with many of the horticulture placement students and some staff members too, in order to show them what’s going on at the apiary.  Not all of Lynda’s volunteers are experienced beekeepers, so they get their training while helping out and sharing knowledge which is so important.  This not only teaches them what’s going on in their environment, but also spreads the message on the importance of our pollinating insects.

The current batch of the Growing the Future beekeeping courses are currently advertised here and if you’d like to speak to Lynda about her work at the Garden, you can email her on lynda.christie@gardenofwales.org.uk

Home to approximately half a million honey bees, our Bee Garden is a abuzz with activity. Get up close to our bees and hives behind large viewing windows.