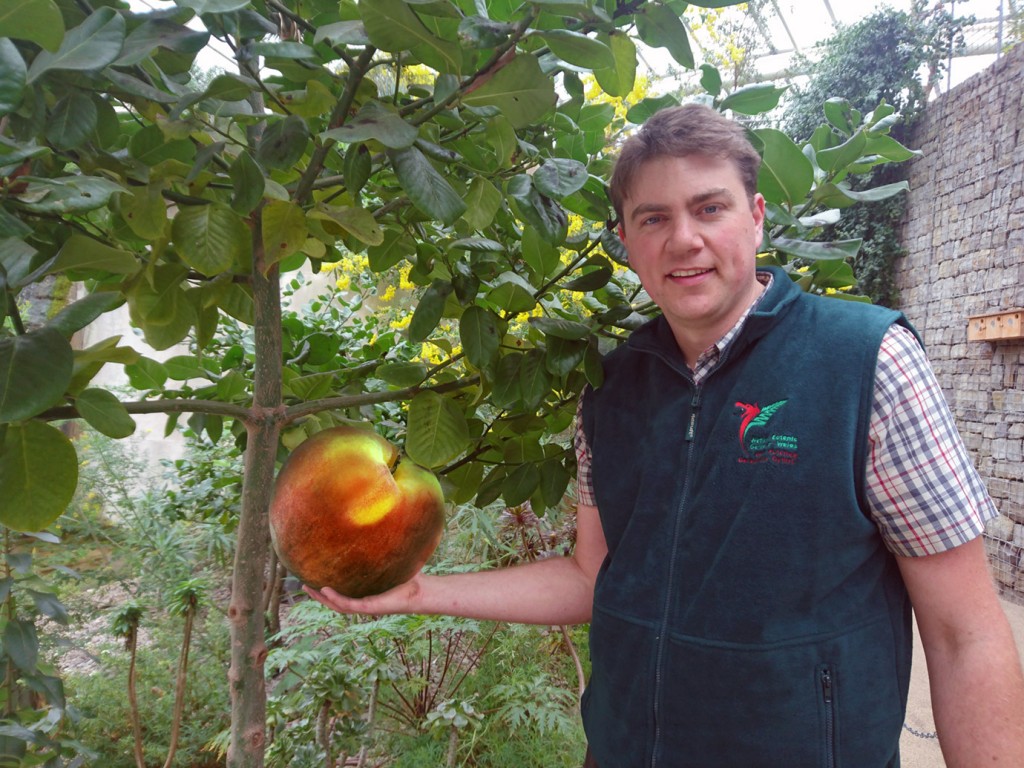 Bit of a head-scratcher, this. The horticulture team here has recently been tending to some shrubs in the Great Glass House, mostly in the Canary Islands zone. My colleague Mike Brown beckoned me to look at something he’d found – I assumed it was that butterfly he’s been talking about a lot recently. What he showed me is quite literally the most astonishing thing I’ve seen at the Garden.

It feels ridiculous to even be typing this, but we think we’ve found a prunus persica – a peach – that’s growing not on a peach tree, but been grafted onto the stem of a Ilex platyphylla (a rare, evergreen holly usually found growing wild on the Canary Isles). And not just any peach; it’s huge. It weighs about 2 kilos at the moment. To put that into context, that’s more than twice the weight of the current World Record Holder.

Certainly it’s the largest peach any of us has ever seen, and we have a combined 56 years of experience between us. And believe it or not, it’s still growing.

We daren’t pick it because it’s such a rare find, but we’re certain it is a peach – a gorgeous, ripe, plump peach with distinctive fuzzy skin.

We’ve read through all our books and encyclopaedia and we can’t imagine how it got there, nor what’s making it grow so much, and so fast. Those of you who know us well know that genetic modification is strictly forbidden here at the Garden, and all the staff have sworn they have nothing to do with it.
If what we’ve discovered here is for real, it could mean the greatest horticultural development of the last century. We’ll certainly keep a close eye on it and keep you updated.