The National Botanic Garden of Wales is celebrating another increase in visitor numbers – even topping last year’s 17-year high. 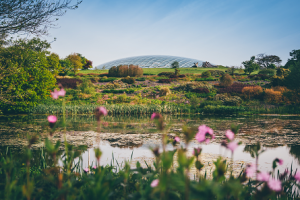 A grand total of 163,403 leisure visitors crossed the threshold at the Carmarthenshire attraction between the beginning of April 2018 and the end of March 2019. Not only is this the highest visitor figure since the Garden opened in 2000, but a huge increase on three years ago, when the total for the year (2015-16) was a little over 114,000.

Director Huw Francis said: “To increase our numbers by nearly 50,000 in three years is a fantastic success story for the Botanic Garden, a real credit to the hard work of our staff and volunteers, and a reflection of the huge support we receive from our members and friends.”

But, said Mr Francis, there are other milestone moments in the past year that are as important as the number of people through the gate: “It’s not all about visitor numbers for a botanic garden: we have to work every bit as hard to meet other crucial goals, too.”

He explained that, as a national institution, the Botanic Garden delivers key benefits for Wales, especially against the Well-being of Future Generations Act: “Delivering more than 27,000 educational engagements with our small team is a real high watermark for us,” he said. “And the exceptional work our science and horticulture teams are doing all around the world – as well as in our own backyard – is something all of Wales can be proud of.”

Against a backdrop of feared widespread insect collapse, Garden scientists are focused on their Saving Pollinators project, which involves researching the behaviour of pollinators to better inform what we can do to help them thrive, deliver habitat restoration and support species recovery.

This year, with specialist support from the Millennium Seed Bank and Botanic Garden Conservation International (BGCI), the National Seed Bank of Wales has been established, while conservation and research work continues on rainforest restoration within the Kinabatangan floodplain in Borneo, as well on endangered plant species in Wales.

Gary Davies, Chair of the Garden added: “The National Botanic Garden of Wales is an independent charity, looking forward to celebrating its 20th birthday in 2020. As the critical research and conservation work goes on, in what looks like being challenging times – both for increasing visitors and securing the required funding for the sort of scientific and educational endeavours we are aiming to do – we will redouble our efforts at every level and look forward to welcoming even more visitors during the coming year.”