The Japanese ambassador for the UK, Koji Tsuruoka, and Lord Dafydd Elis-Thomas were the VIP guests for a very special day at the National Botanic Garden of Wales on Tuesday June 4 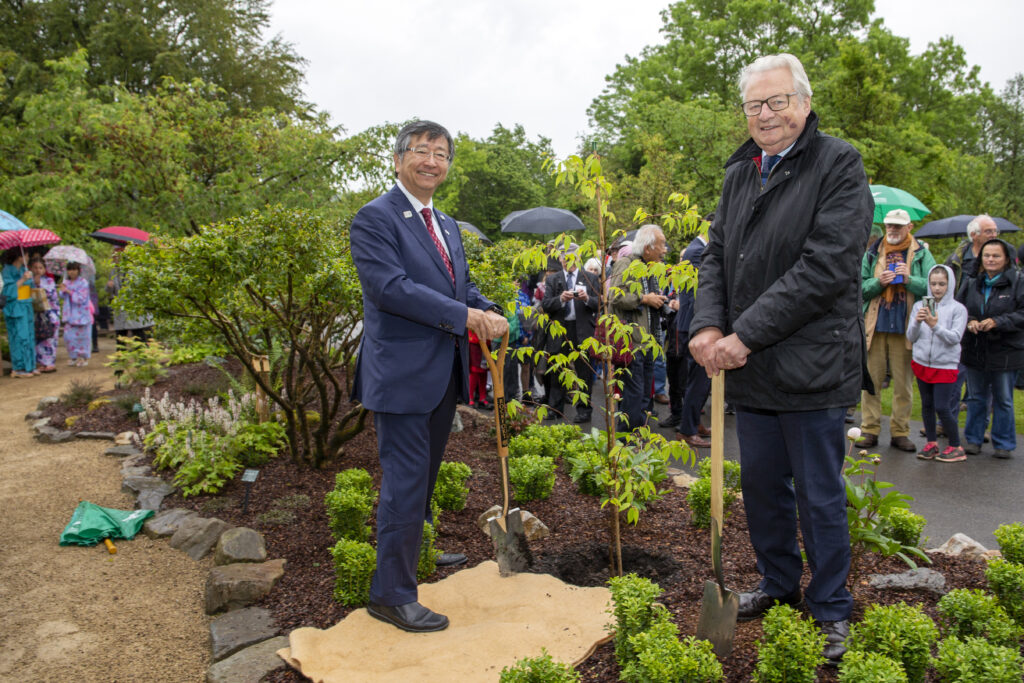 The Japanese ambassador for the UK, Koji Tsuruoka, and Lord Dafydd Elis-Thomas were the VIP guests for a very special day at the National Botanic Garden of Wales on Tuesday June 4.

The Aber Taiko drummers and a Welsh harpist Shelley Fairplay were on hand to help celebrate the reopening of the newly-restored Japanese Garden; a celebration that also included an introduction to Chadō, the ancient Japanese Tea Ceremony ritual.

The ambassador spoke of strong links between the two countries which shared a common love of gardens. He said: “It is a beautiful garden once again. I am convinced it will be kept in excellent shape as a symbol of the bond of friendship between Japan and Wales.”

Lord Elis-Thomas, deputy minister for culture and tourism, also spoke of strong links between the two nations and added that he had the best job in Wales: “Looking after this Garden is a joy for me.”

He and the ambassador then planted a tree to mark the occasion – a Japanese hornbeam, Carpinus japonica, and Mr Tsuruoka was presented with a bottle of Pollination gin from Dyfi Distillery and a copy of Blodau Cymru, an illustrated, comprehensive introduction to Welsh plants and flowers.

Director of the National Botanic Garden, Huw Francis called it a “special day” and paid tribute to the Japanese Garden Society and Botanic Garden staff for their hard work, and also thanked the Japanese Government for their contribution and the ambassador for the part he has played in the project.

Months of work have gone into the refurbishing of the area, which was constructed in 2001. It began life as a gold-medal winning at Chelsea and also earned the coveted ‘Best in Show’ prize for its designer, Professor Masao Fukuhara. The then Japanese ambassador suggested that the garden be given a permanent home at the newly opened National Botanic Garden of Wales. Professor Fukuhara and his team of Japanese gardeners rebuilt the garden at the Carmarthenshire attraction in November 2001.

Japanese Garden Society vice-president Graham Hardman also paid a warm tribute to two of the Botanic Garden staff, Daryll Little and Celeste Wilkinson, praising them for their “hours of very hard work and love for this garden”.

Visitors – who included children from nearby Nantgaredig School and pupils from the Japanese School in Cardiff – were also treated to a tour of the garden, a talk by Japanese Garden Society president Graham Hardman and a display entitled ‘Visions of Paradise’ in the Botanic Garden’s gallery.

The Japanese Garden is a miniature world with mountains, forests, lakes and oceans