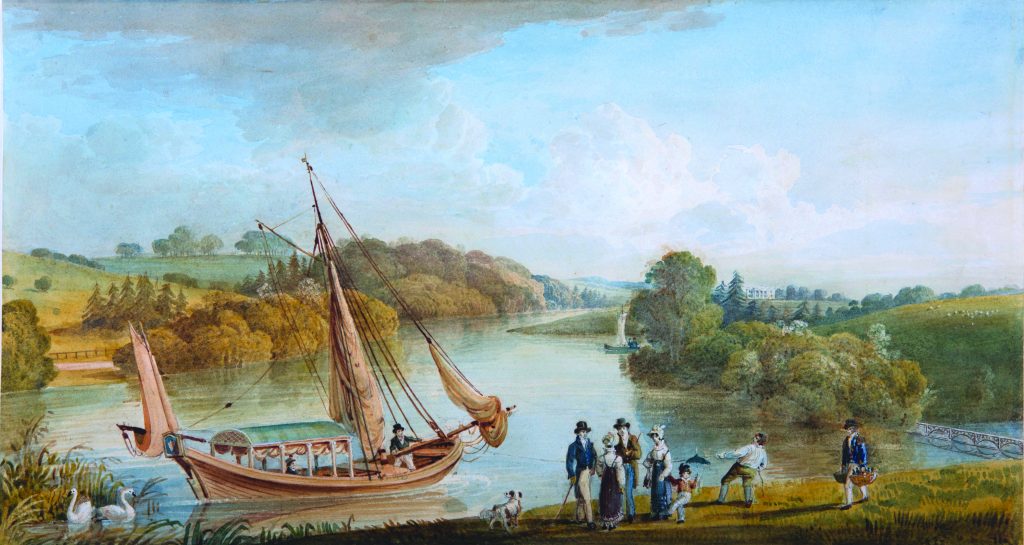 Thomas Hornor’s 1815 painting of Llyn Mawr All Rights Reserved: Image reproduced with the kind permission of the Grant Family

A grant from the Heritage Lottery Fund is the final piece of the jigsaw signalling the launch of the construction phase of a £7.2 million project to restore the legendary landscape of one of the finest Regency waterparks in Britain.

Baroness Kay Andrews, UK Trustee and Chair of the Heritage Lottery Fund in Wales, said: “Once completed, this exciting project will confirm the Botanic Garden’s place at the top of everyone’s to-do list. It will make not only an amazing day out for families and people of all ages and a must-see for those outside Wales and even further afield.”

Economy Secretary, Ken Skates said: “Our natural heritage is a precious resource, and combining the Botanic Garden’s horticulture expertise with its own history will make an exciting and powerful new visitor attraction for Wales.

“The Welsh Government is a proud supporter of the Botanic Garden and we welcome this investment which will help provide new skills and training for volunteers and apprentices.”

The original owners of the estate where the Garden now stands,  the Middleton family, began to lay out formal gardens from the late 16th century using wealth gained from procuring spices, herbs and other goods as founders of the East India Company in the early 1600s.

It was not until the estate was bought by MP for Carmarthen, Sir William Paxton, in 1789 that the grounds came into their own.

Protegé of world-famous landscape architect, Capability Brown, Samuel Lapidge was commissioned to design the landscape and gardens to include an innovative water park with water flowing around the estate linked by a network of dams, sluices, bridges and cascades.

It is these ground-breaking water features that will be brought back to life for modern day visitors to enjoy.

Director of The National Botanic Garden of Wales, Huw Francis said: “Spring has certainly sprung here at the Garden, with this fantastic news chiming in a fresh season and a fresh chapter in our history too.

“Since we opened in 2000, we have always wanted to celebrate not only our horticulture but also our heritage.

“The main house was destroyed decades ago through fire but the impressive grounds have left plenty of traces in the form of drained or silted lakes and overgrown paths. This funding will mean we no longer have to imagine what the estate might have looked like – we can now recreate it for our modern day visitors to experience first-hand. It will be spectacular.”

Mr Francis added that the restoration work will happen alongside an exciting programme of activities and events providing a range of opportunities for people to get involved.

The news is timely not only coinciding with the Visit Wales ‘Year of Legends’ and ‘Year of the Sea’, but also the enormous popularity of the BBC TV series ‘Taboo’ in which the East India Company has a key role amid a dramatic and compelling cocktail of conspiracy, betrayal and bloodshed. The Garden’s heritage and history is inextricably linked to the Company, from its first flourishings to its decline at the end of the 19th century.

The Garden’s Head of Development, Rob Thomas, who is responsible for successfully piloting the funding bid, said: “The Middleton family was one of the driving forces behind the creation of the East India Company, creating a wealthy Welsh dynasty with a home in the heart of Carmarthenshire. With the decline in the Middleton fortunes, the estate was acquired in the 1780s by Sir William Paxton, a Scot returning from his East India Company service as one of the wealthiest men in Britain.

“He set to work, creating the blueprint for the landscape here today, employing the finest minds of the day to design the mansion, gardens and necklace of lakes that surrounded his hilltop home.

“He would have been acutely aware of the Middleton history that he was buying into. This truly was the heyday of the estate and the Garden today can not only claim that it has been a site of formal growing for more than 400 years, but can also point to the fact that it had its very genesis in plants for health and the profits to be made from them and was sustained by the development and growth of the British Empire.

“It is an incredible story of pirates, plague and plants for health, and plots a period of 250 years of international trade from the times of barter and exchange to the establishment of international lines of credit and investment banking; the forging of the blueprint for our current capitalist system; and, in the hands of Sir William Paxton, the formation of modern investment banking.”