Propagate a better understanding of plants and the planet. Patron prince’s challenge to the National Botanic Garden 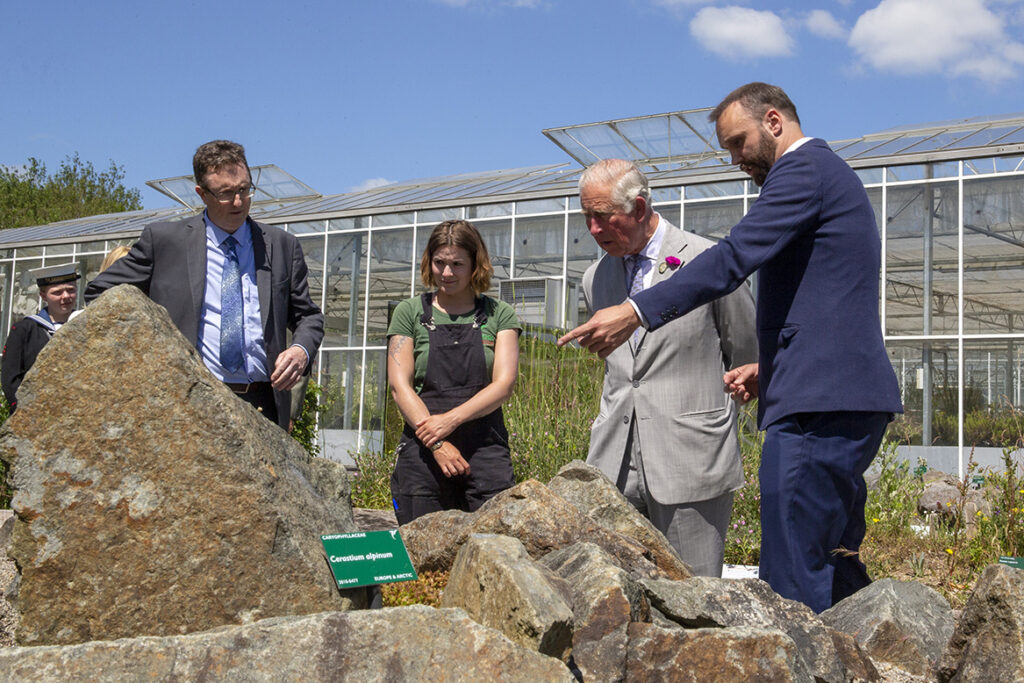 There was a wonderfully warm welcome for His Royal Highness The Prince of Wales at the National Botanic Garden on Wednesday 3 July.

Under blue skies and a bright summer sun, the Prince – who is patron of the Botanic Garden – praised the work the staff are doing but urged them to do more.

He was given a glimpse of the science and conservation being carried out at the Carmarthenshire attraction and paid tribute to the work, especially in the areas of conserving Welsh native plants and protecting pollinating insects.

The Prince said: “So many us don’t realise exactly what these insects and bees are looking for when it comes to food plants so I’m particularly interested in the surprising short list of plants that they really depend on and I rather hope that the Botanic Garden can do as much as it can to propagate the understanding of what is required.”

He was visiting the Garden on day three of the royal couple’s five-day visit to Wales, which coincides with the 50th anniversary of His Royal Highness’s investiture as Prince of Wales.

During their tour, Charles and Camilla are undertaking more than 20 engagements across the country, visiting a range of Welsh charities, organisations and communities with which Charles has been involved in the past five decades.

He said he was “thrilled” to be back in the Botanic Garden and praised the progress that had been made in the seven years since his last visit.

“People’s gardens can make such a huge difference to what you are trying to do here and it seems to me that, as we are on the whole a gardening nation, there is an enormous amount that can be one to help preserve many of these plants.

“As I’ve be trying to say for over 30 years or more, it is so absolutely crucial to tackle the whole issue of climate change otherwise we will lose an immense amount of our biodiversity, all the insects we depend on and the wildlife we depend on.”

After a tour of the new National Seed Bank of Wales and the Garden’s science labs, His Royal Highness then officially opened the Conserving Welsh Natives display – featuring plants from Welsh nature reserves from Cwm Idwal to the Great Orme and Kenfig Burrows as well as the Botanic Garden’s own Waun Las National Nature Reserve.

He said: “What the Botanic Garden is doing here and what Kew and other places are doing is of absolutely vital importance.

“I don’t think many people seem to realise how integrated we are as human beings with nature and natural ecosystems and without them we will find it very difficult to survive.”

After meeting staff, a walk through the nearby Apothecary garden and the recently refurbished Japanese Garden, the Prince left to meet Camilla who had been on a separate visit to Carmarthen.

National Botanic Garden of Wales director Huw Francis said: “We were pleased to welcome His Royal Highness to the National Botanic Garden of Wales and to have the opportunity to show him the world-leading research and conservation work being done here by our highly-skilled team of scientists and horticulturists. We are very proud of the work being done to conserve rare and endangered indigenous Welsh plants, and his generous praise and encouraging words will propel us to strive for even greater achievements and more success. We are very privileged to have him as our patron and his support will really resonate with our team. We must all, though, heed his words of warning about climate change and the need to encourage greater understanding of our planet, its plants and its wildlife.”