A very special presentation took place at the National Botanic Garden of Wales when the First Minister, Mark Drakeford presented His Royal Highness, the Prince of Wales with an oak sapling as a gift to mark the Queen’s Platinum Jubilee. 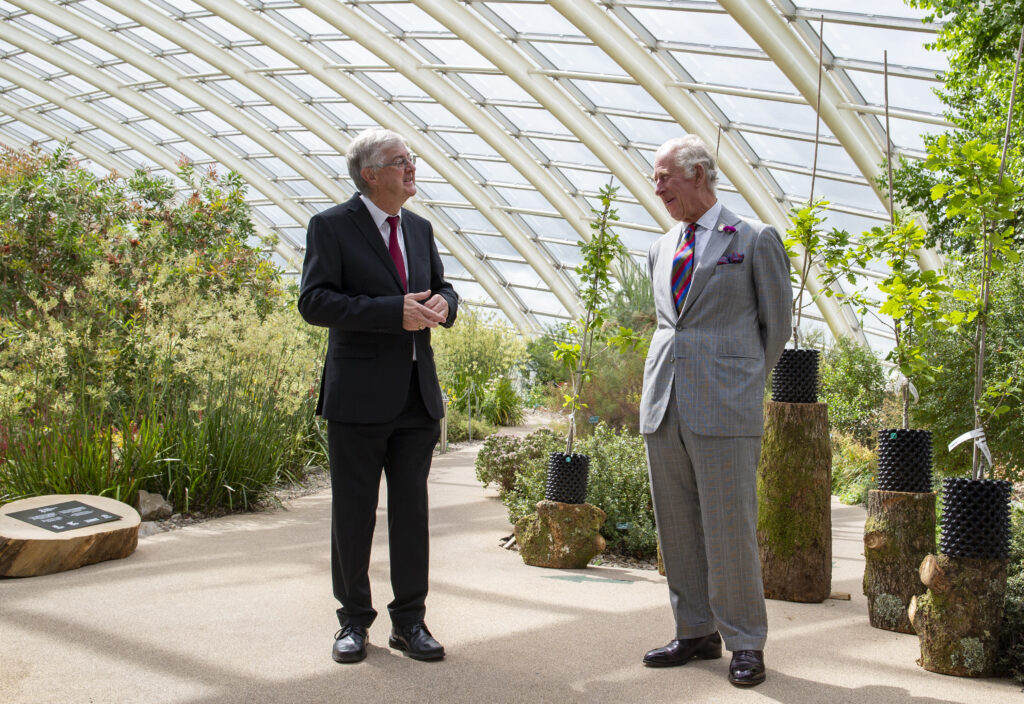 The sapling is one of five grafted from the famous Pontfadog Oak which fell in a storm in 2013. The oak was more than 1,200 years old and grew to a whopping 43 feet in girth and was at the time, the biggest oak tree in the UK.

Presenting The Prince with the young tree, Mr Drakeford said: “The Pontfadog Oak was a symbol of durability, of reliability and a consistent presence in the lives of so many people and, in that sense, it offers us a reflection of all the things we have celebrated as part of the jubilee as well as being part of the Queen’s Green Canopy campaign which has marked the jubilee year.” 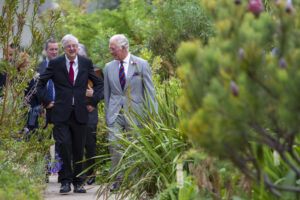 Accepting the gift, The Prince of Wales said: “It is such a special occasion to be able to commemorate these monster oaks… I hope the saplings will actually grow and provide extra interest and pleasure to so many people who mind about the difference that trees make to our lives.”

Also attending the event were brother and sister Jo Williams and Chris Morris who grew up at Cilcochwyn Farm, near Chirk, where the oak once stood and whose family has farmed the land there for five generations.

Jo was delighted to be able to share with the Prince some of her memories of the old tree: “I’ve known it all my life and I have photographs of when I was a little toddler with my mum standing in front of it. Over the years, it attracted the interest of the Guinness Book of Records because of its age and its girth, and the local school has it as their logo. 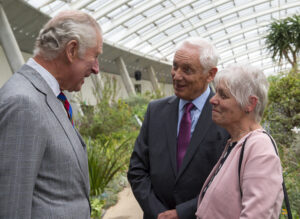 “The young trees look so nice and I really appreciate the way the Botanic Garden team have displayed them. Today has been very emotional. I cried when it fell down and, when I saw the saplings today, I started to cry again.”

Brother Chris said: “The prince sympathised with us about the death of the tree and said how he was delighted this was happening and it was all about rebirth.

“My sister and I grew up at Cilcochwyn Farm which is where the tree was. We spent our youth playing in the tree. I was telling the Prince about the cows that you can get inside because it was hollow; a big, big hollow trunk with all these bulbous growths around the outside.

“The local farmer would use it as a sheep pen. If he had a sheep and a lamb that he wanted to keep separate, he’d put them in the tree and put a gate around the side. We used to have forts in there and built dens; you could literally climb up the inside of the tree.

“If you had seen it back then you’d have said to yourself: “How on earth is that standing?”’

National Botanic Garden curator, Alex Summers said it was astonishing to think that the old oak was an estimated 1200 years old when it succumbed to the elements in 2013. 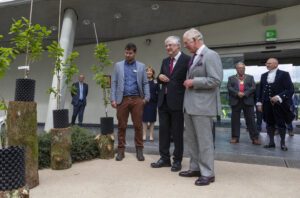 He added: “It is exciting for the Botanic Garden to have the opportunity to be the guardians of these young saplings for their return to Wales.

“As we develop a National Arboretum here at the Botanic Garden, these saplings will connect us to the nation’s natural heritage, along with the others planted across the country”. 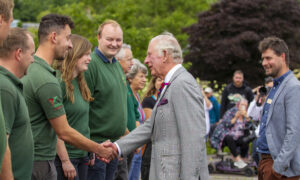 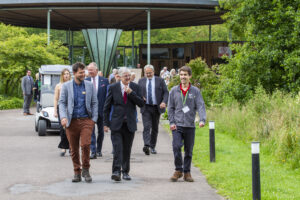 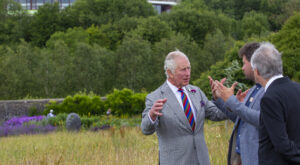 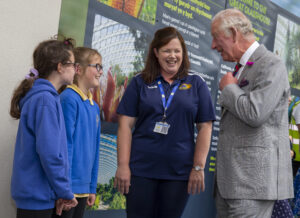