Edward Hamlin Adams, a West India merchant and banker, his son and then grandchildren owned the Middleton Estate during the Victorian era 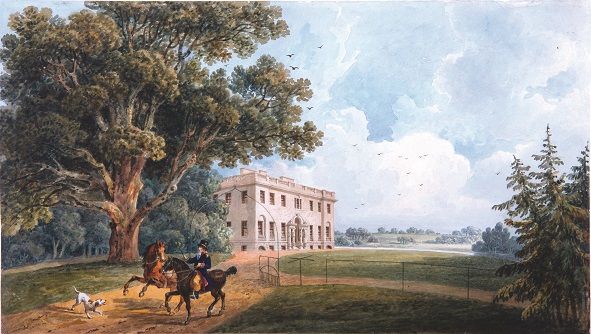 Thomas Hornor’s 1815 painting of the back of Paxton’s Middleton Hall All Rights Reserved: The Grant Family

Upon Paxton’s death in 1824, the estate was sold by the executors of his will, and was bought by Edward Hamlin Adams for £54,700. The hall at the time was described as being “beautifully ornamented with wood and water” by the sale catalogue the hall was advertised in.

Adams was Jamaican-born banker and merchant who made his fortune through various business ventures, some of which were of a questionable nature. Adams was not a gardener, nor was he fond of water features, and he allowed most of the estate to fall into disrepair, only maintaining the parts visible to the house. His granddaughter, the novelist Vernon Lee, described him as “extremely doctrinaire and moral, an ardent Voltairian, who spent much of his time disputing with the local parsons and refusing to pay tithes”. He died in 1842, and the estate was passed onto his eldest child, a son also named Edward. His youngest child, Alice Abadam, was heavily involved with the suffragette movement in 1904/5.

Edward, who had changed his last name to Abadam, was very much like his father, disliking the country and gardens. According to his estate manager, Thomas Cooke, Edward was a social nightmare, squandering the family fortune in an attempt to have his younger brother’s, William, children declared illegitimate, leaving his siblings financially ruined.

Due to his son having predeceased him, Abadams left the estate to his eldest daughter, Lucy, and her husband, and then onto her sister, Adah, widow of J. W. Hughes. Her son, Major Williams J. H. Hughes, then later sold the estate to Colonel William N. jones in 1919.