In the seventh century this place was part of the kingdom of Seisyllwg, successor to the area controlled by the Romans from Moridunum (now Carmarthen), possibly based on the pre-Roman tribal territory of the Demetae. 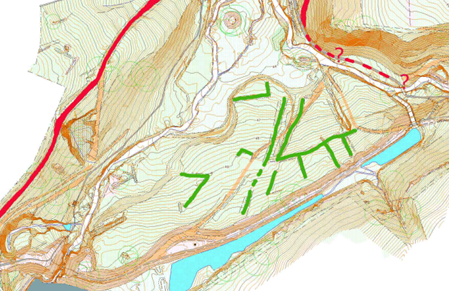 The traces of the medieval field system are shown in green to the north of Llyn Mawr.

Not a lot is known about the estate before the 1600s, however, we have managed to piece together a brief history using the information available.

In the pre-Roman times, it is possible that this land was a part of the territory owned by the Demetae. Then, when the Romans invaded, the land came under the control of the Romans based in Moridunum, which is now Carmarthen. Ancient field boundaries have been found north of Llyn Mawr, proving that the land had been previously farmed, probably for at least 2000 years.

Not much is known about the land during and after the Norman invasion, the area now under the rule of the Princes of Deheubarth, the kingdom made up of Seisyllwg and Dyfed.

In the 12th century, the land came under the control of the English king, where it was became the property for a Marcher Lord, and was then later incorporated into the Shire of Carmarthen in 1536, under the Act of Union.

In 1609 the area was surveyed by the Duchy of Lancaster, and it records Christopher Middleton possessing a substantial piece of freeholding, most likely only recently acquired.