You can play a part in keeping our honey bees and other insects safe. Our beekeeper Lynda Christie explains 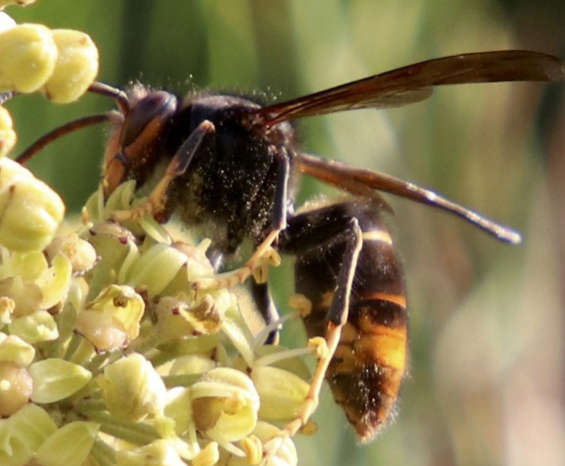 We should all be worried about the Asian hornet.

They are very efficient predators of insects such as honeybees and other pollinating insects. Our native honeybee – Apis Mellifera – has no defence when faced with this foreign predator, unlike the Asiatic honeybee – Apis Cerana –  which has developed strategies to combat the threat.

Honeybee stocks and pollinating insect numbers could be decimated if the Asian hornet gets a firm foothold in the UK and could greatly affect the biodiversity of our countryside and urban areas.

When did the Asian hornet get to the UK?

It arrived in France in 2004 and has spread throughout the country, progressing into Spain and Portugal and, in 2016, first sightings were seen in the UK.

There have been 17 confirmed sightings in England since 2016 with nests being destroyed.  There have been incursions into Somerset, Gloucestershire, Dorset, Cornwall and Kent, with even one specimen in Scotland. It wouldn’t be inconceivable to imagine that they could easily turn up in Wales too.

A Warning to Beekeepers

If not all nests have been discovered the previous season, a mature nest can release between 200-300 new queens in the autumn. Overwintering queens come out of hibernation in the spring, so now is the time to be vigilant.

Beekeepers need to remind themselves of the differences between native and non-native hornets and wasps – download the NNSD poster for further information.

The first sighting of 2020 was at St Brelade, on Jersey in February and, to date, four nests have been destroyed.

The public have a part to play, too

If a member of the public sees an unusual insect that they think may be an Asian hornet they can help.

Asian Hornet nests are very like our native wasp nests. They start off as a small round nest about the size of a golf ball with a few cells in the centre but can reach the size of a football or beach ball at maturity.

Primary Asian hornet nests have been found high up in trees but there have been occasions of nests in hedges in gardens and hedgerows. In urban areas, the nest could be found in wall cavities and roof spaces and garden sheds. The main aim is to make a positive ID and contact the experts for clarification and safe removal.

Take a photo if you have your phone with you to help identify the suspect, note the location but do not disturb if you find a nest. Wasps and hornets can give a nasty sting if their nests are disturbed.

Send in details to the Non-Native Species Directorate at alertnonnative@ceh.ac.uk  Beekeepers should contact their local Asian Hornet Action team (AHAT) co-ordinator at one of the WBKA associations, who will help confirm identification.  If identification is positive, the bee inspectors at NBU will be contacted and are authorised to deal with an incursion.

Other threats for Beekeepers to look out for

As with any custodians of livestock, beekeepers are on the look-out for pests and diseases that could affect their colonies. This is why we advocate regular inspections of colonies throughout the season and to do disease inspections regularly.

Do you notice anything unusual? Signs could include shaking bees that will not go down onto the comb even when using smoke or an unusual smell when opening a hive or greasy cappings in the brood area. These could be signs of chronic bee paralysis virus or foulbrood disease.

We are very lucky in the UK to have the National Bee Unit and inspectors that are available during the season to come out and inspect our colonies if we see a problem. If disease is found, it can be treated and nipped in the bud preventing widespread outbreaks.

The media has a field day during May to June when some honeybee colonies swarm. There are sensationalist stories of massive swarms of bees arriving in towns and cities terrorising the locals.

Honeybees tend to want to swarm each spring to create new queens and increase colony numbers. Beekeepers aim to manage this process in their colonies but sometimes get caught out.

If you see a swarm, report it to your local beekeeping association. Details can be found on the WBKA website and each association has a contact for swarm collection. A beekeeper will be sent to the site to collect and rehome any wayward bees.

Just to note: a swarm of honeybees is usually very docile. They are just looking for a cavity to make a new home but do not disturb or try to deal with them yourself. Leave it to the experts.