Growing the Future’s Horticultural Trainer, Ben, has written this helpful guide on taking cuttings in the garden. 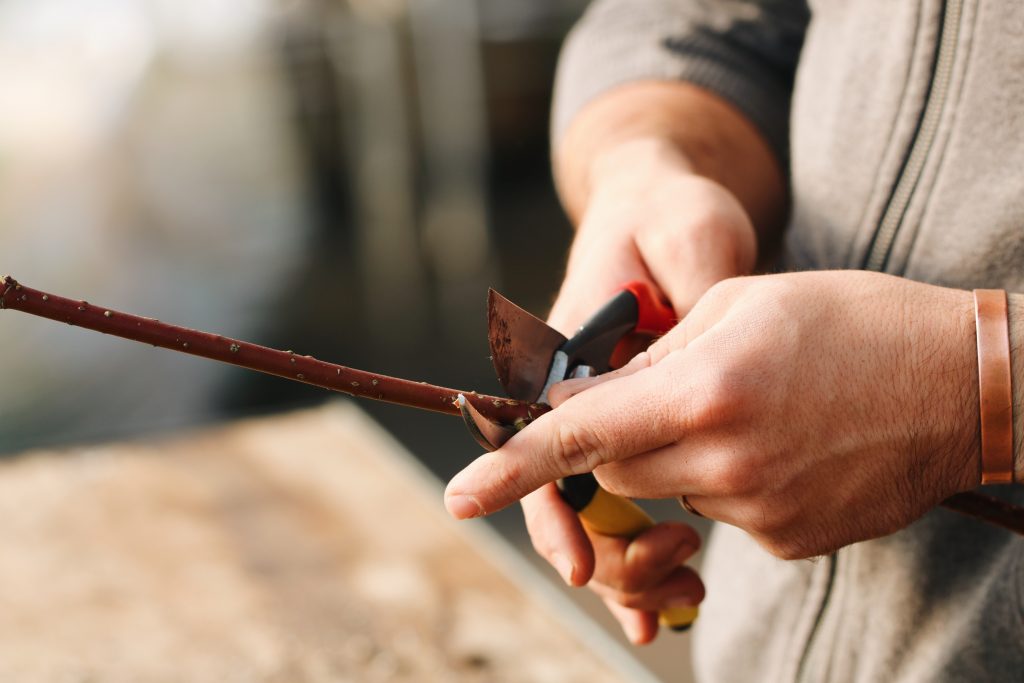 Taking cuttings is a great way to propagate new plants.  Growing the Future‘s Horticultural Trainer, Ben, has written this helpful guide on taking cuttings in the garden.

To take these cuttings, select healthy vigorous growth, formed in the current year. Remove the soft growth for the top of the cutting, making this cut just above a bud, and slanting it away from the buds to show which direction is the top. Cut the cuttings into 15-30cm lengths, with the bottom cut being just below a bud.

Leave the cutting in the ground until the following autumn and keep moist in the summer to prevent drying out.

Semi-ripe cuttings are taken between mid-summer and autumn when the new growth on the plant has started to harden up. When taking these cuttings, ensure that you select growth which is typical to the plant and not damaged or diseased in any way. It is often best to take these cuttings in the morning to prevent wilting, and use the material as soon as possible after collection.

When taking these cuttings, trim them to around 10-15cm cutting just below a leaf node. Remove the lower leaves and the soft tip, leaving usually around 4 leaves remaining. If the leaves are large, cut the leaves in half to prevent water loss. After preparing the cuttings, dip the base in rooting hormone, tapping off any excess, and pot them into a well-drained potting mixture in pots, ensuring that at least half of the cutting is below the soil level.

Water well and allow the water to drain off. Place the pots in a glasshouse, or frost free environment away from direct sunlight. Cuttings taken in summer rarely need bottom heat, however cuttings taken later in the season will benefit from being on a heating mat. Keep the compost moist but not wet, so that the cuttings are less likely to rot. Keep an eye on the cuttings as they progress, removing any dead or diseased cuttings when you see them. These cuttings will need two or three weeks of hardening off before they are planted into the garden.

Softwood cuttings are taken before summer when the growth on the plants is still fresh and supple. As before, choose healthy typical shoots from the garden shrub. Remove material from the shrub neatly above a leaf node to reduce the risk of dieback on the parent shrub.

Much like with semi-ripe cuttings, cut the material just below a leaf bud, and remove the lower leaves. Pinch out the top soft growth of the cutting such that it is between 5-20cm long. Dust the base of the cutting with rooting hormone before placing into a well-drained compost mix in pots. It is advised to use a dibber when doing this to reduce the risk of any damage to the base of the cutting.

Water well and allow the water to drain off, before placing the cuttings in a heated propagator away from direct light with a bottom heat of between 18-24 degrees Celsius. Ensure that the cuttings remain moist until rooting which should be within the next 4 weeks.

Once rooted, harden the cutting off for a few weeks before taking them out of the propagator and potting them on individually. Remove any dead and diseased material as soon as you see it, and allow the material to grow substantially before hardening off and planting out into the garden.