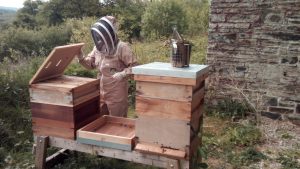 I thought my apiary inspections were going to be thwarted due to the rain that we had in the morning that had not been forecast. But, by late morning, the sun came out and at one point the temperature reached 24 degrees Celsius.

The swifts were flying and screeching over the Stable Block, which is such a wonderful sight and sound.

Now is the time of year that we have to be vigilant when we do our colony inspections, looking out for signs that the bees intend to swarm. It is not always the colonies that you predict will swarm that actually do.

I have one hive already on a double brood box. The queen has laid up 10 frames of brood and they have drawn out most of the comb in the top box. This hive seems very happy working away. They do have some drone brood but no signs of making new queens. 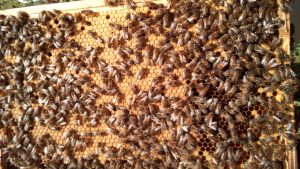 I still intend to keep a close eye on this one and may divide it, as it will get far too high to manage comfortably if and when it needs further boxes to collect stores.

Another colony that I have previously shook swarmed, this is putting the colony on all new comb at the start of the season, (it gives the bees lots of work to do because they have to make lots of wax and draw out all the new frames) they should be so busy that they delay any swarming tendencies until later in the season – but No!

Today, I went into the hive to discover eight queen cells. This means I have had to do emergency swarm prevention on this hive. As it happens, another colony had gone queenless so I was able to donate a queen cell to help this queenless colony, while sorting out this one so that we don’t lose any bees. 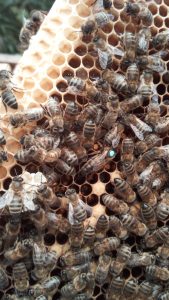 The bees can be very sneaky and hide queen cells. So, sometimes you have to look very carefully at the comb to find them. It’s not always obvious. And it gives a reminder that we must keep timely visits to the apiary at this time of the year.

If you see a swarm of bees, don’t panic. Honeybees are mostly very docile when swarming. They are looking for a suitable site to take up residence and make a new colony. Contact your local Welsh Beekeepers’ Association who will put you in touch with their Swarm Collection contact to arrange collection and removal. You can Google WBKA to find the local association.

On the whole, today’s inspections went mostly to plan. Lots of queens were seen, also eggs and larvae. The bees were flying, foraging and enjoying the good weather. 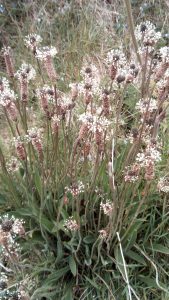 They have plenty of stores to see them through the next cold spell that is coming in the next few days. Pollen is being collected, mostly light yellow/creamy coloured which could be the bluebells which are in abundance near the Garden’s Springwoods or the plantago plants (plantains) which are in full flower. The Garden is looking beautiful with lots of plants coming into flower, so the bees are spoilt for choice.

To finish, here is a mid-17th century proverbial bee-keeper’s saying: