In addition to the ever-popular apple identification service and apple tasting opportunities, we are delighted this year to have a series of talks about apples.

Saturday 19th October  1-2pm  – author Carwyn Graves will talk about “Apples in Wales”, his book written to highlight Welsh apple varieties and the part apples have played in Wales and its history down the centuries.

Sunday 20th October 1-2pm – author Naomi Slade will talk about her book ‘An Orchard Odyssey: Find and grow tree fruit in your garden, community and beyond’

Saturday 19th and Sunday 20th October 12 – 12.40pm – Growing the Future horticulturist Ben Wilde will be in the Double Walled Garden to demonstrate how you can grow apples in a small garden.

Also in attendance for the weekend will be Paul Davis of Dolau Hirion Nurseries who will be selling trees of Welsh apple varieties as well as giving advice about the varieties to grow in your garden.

The Garden has also been awarded National Plant Collection status for the Welsh varieties of apples in the Garden’s Orchard and the weekend will give an opportunity to open the orchard officially.

Local food, cider and apply juice producers will also be selling their home-produced wares as usual, as well as Activities for All – activities for adults, children and families – including apple pressing and crafts.

This event is part of the Garden’s Growing the Future project. 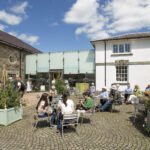