A Good Place To Go

Our visits to the National Botanic Garden of Wales are usually in the form volunteering and can be busy with no time for just wandering about.  So we decided to go as visitors on Easter Sunday afternoon.  It was a beautiful day and some of our family were visiting so we all decided that it would be a good place to go.  Well, that is to say the adults thought it would be a good place to go, the children (who are actually teenagers rather than little children) came along with only a bit of a moan.

The first question we were asked when we got there was why are there empty spaces in some areas.  So we explained about the restorative work that is going on and how it is a look to the future sort of project.  If you want to know all about it have a look at the February Curator’s Blog where Simon explains what’s happening.  As for me, well I actually think the beds look great, so neat and orderly.  It reminds me of what I often think when I look at our own garden and that is how great it would be to take everything out and start again.  Some of the plants that are in it now are favourites and would be replaced but others have fallen out of favour and would either go to the big compost heap in the sky or be passed on to anybody that might want them.  Gardens sometimes outgrow themselves and need radical work to get them looking as they were meant to look.  That has certainly happened to our garden.  Whether it will ever get the make over remains to be seen.

The kids enjoyed themselves doing the Easter Egg Trail (anything with chocolate at the end of it is bound to be a winner!) and we only heard one “This is boring, can I go and sit in the car?  Which from four teenagers isn’t bad.  Incidentally, the answer was “No”.  We enjoyed the Quack Pack and Fiddlebox and all the other things that were going on.  The atmosphere was lovely and, for me, one of the great things about the Garden is that there is always such a lovely feel about the place, especially when there are things going on and people are relaxed and enjoying themselves.

I finished up in the Great Glass House with my son and we looked at plants and took photos.  He’s not a gardener but enjoyed the many and varied shapes of the plants and the shades of light within the Glass House.  It was nice to wander with him (it doesn’t happen often) and see what he liked and how he saw things.  We were in two cars and we left before they did (well someone had to cook the dinner!) and left them playing some sort of tag game in the children’s play area.

All in all everyone enjoyed the visit and I mean EVERYONE. 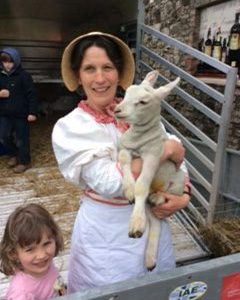