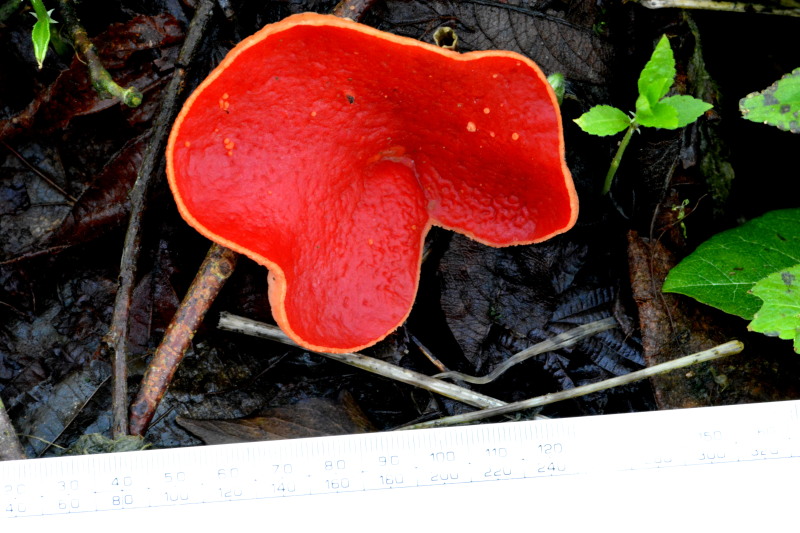 The warmest meteorological winter (Dec, Jan, Feb) since records began in the 17th century, largely down to a record-breaking December – and November was also a couple of degrees warmer. In addition to that, December was totally frost-free and it wasn’t until Jan 20th that we had the first real frost and not until mid-Feb that frosts became a more ‘normal’ feature.

But the other aspect, apart from the warmth, has been the rain. Lots of it. I registered 10 inches in November, over 11 in December and almost as much in January. By comparison February has been quite dry at 5.28 inches, but coming on top of totally saturated ground everything has been ‘drowning’ – I think none more so than the Primroses which have appeared far too early and look totally bedraggled, as it they had been dragged out of bed too early after a heavy night out.

Daffodils seem to have been least affected by the rain and have responded to the warmth by appearing from mid-December, whilst the Snowdrops also put in an early appearance in January – and are still with us. But the Crocuses have been rather tardy and even now, at a time when the area around the Great Glasshouse should appear smothered in them, they still seem to be waiting for the Sun. Bluebell leaves were starting to appear a few weeks ago, but the more normal weather seems to have halted their growth – indeed many things seem to have gone into temporary hibernation and if the forecasts are anywhere near right, this may end up as a more ‘normal’ Spring for wildlife than could have been expected a month ago. But the first grass cut will be harder work than usual as the grass had continued to slowly grow until a few weeks ago.

For birds it has meant that we apparently haven’t had the usual number of visitors to our shores, or gardens and I wasn’t the only one with almost no visits on the day of the big bird count. Haven’t heard anything about that yet.  But we have seen evidence of Snipe both in Trawscoed Meadow and yesterday by the Charcoal burner by the back entrance.

We have had very little to report on the Moth front – again largely due to the wet weather. And Hedgehogs have apparently been badly hit, not knowing when to hibernate, but Badgers have maybe enjoyed the easy access to worms. There has been little sign of Otters, perhaps because of all the disturbance in Pont Felin Gat. But yesterday we did find a bit of old Spraint on the usual stone by the Gatehouse stream.

My ever early Frogs did their business 3 weeks earlier than usual and I think yesterday was the first time I have seen Spawn in the Bog Garden.

Fungi have enjoyed the warmth and the wet though we forget how dry it was in September, and cool, a couple of degrees below normal. October was also dry. So the Fungi season was displaced and I think this week was the first one where we didn’t notice any, apart from Peter’s Sulphur Tuft find in the GGH and the Elf Cups which are normally one of the first signs of Spring. But apart from the splendid specimen we found by Pwyll Yr Ardd yesterday, Elf Cups have been nowhere near as numerous as in previous years. 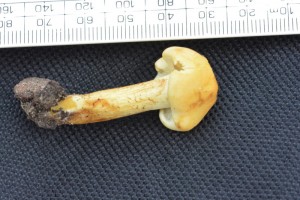 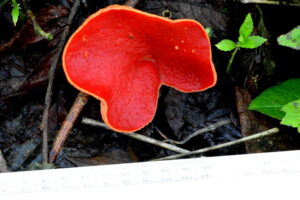 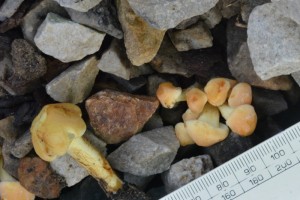 For the record my Llannon readings for the last 6 months. I am at 600 ft (180m) above sea level. The CET figures are the mean temperatures for Central England from 1878 – 2006 which I use as a reference. Grass starts to grow above 6C.