Rolling fields, a necklace of lakes, gentle cascades and mature woodlands all contribute to a seemingly timeless and ever-present landscape. We would however encourage you to look again. 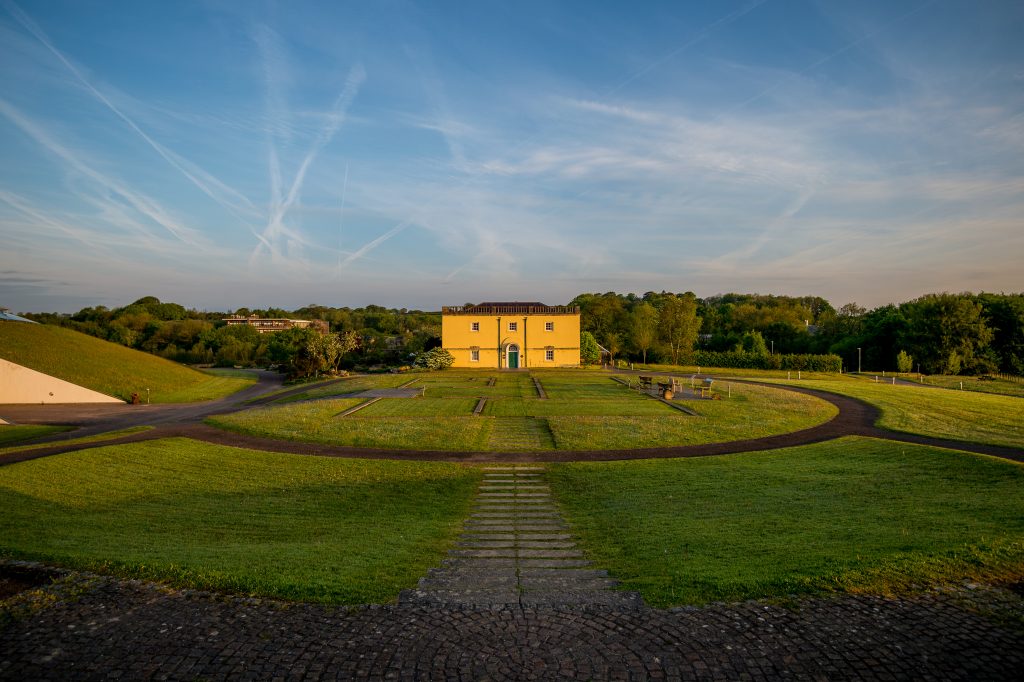 When exploring the Waun Las National Nature Reserve today you will discover a calm and harmonious landscape, framed by scenic views and with an abundance of wildlife. Rolling fields, a necklace of lakes, gentle cascades and mature woodlands all contribute to a seemingly timeless and ever-present landscape. We would however encourage you to look again. Managed landscapes are dynamic, changing over time and evolving with owners, use and influence. There are few remnants of the medieval farmland or Jacobean flower gardens that once existed, apart from the rich cultivated soils they left behind. Not all history has been lost however and many features of the landscape allude to the Middleton Estate’s past and the role in garden history it played. The recently completed Regency Restoration project (2015 – 2020) investigated the estate’s history, restoring built heritage, parkland aesthetics and water features. The Heritage Lottery Fund supported project has carefully restored many of the elements documented in the early 1800s, such as lakes, waterfalls, pathways and bridges to enhance the Nature Reserve, providing improved access to the Botanic Garden’s historic environments and natural heritage. The project has re-established much of the landscape character which was in vogue during the Regency period and now reimagined for a modern botanic garden.

Why was the Regency period an important time in garden history?

During the 1700s the theories of William Kent (1685 – 1748), Lancelot ‘Capability’ Brown (1716 – 1783) and their interpretation of the ‘landscape garden’ was revered throughout Britain and continental Europe. Many parks and gardens were designed based on their principles or under their direction. The designer(s) of the Middleton Estate’s masterplan in the late 1700s and early 1800s is not currently known but there is some evidence that suggests Samuel Lapidge is a likely candidate. Lapidge worked for Brown as a draughtsman and was a dedicated follower of his philosophy and shared his sensibilities. He continued to employ Brownian ideas and methods after Brown’s death and completed many of his unfinished projects. The relationship with the estate’s neo-classical architecture and the signature features employed indicate continuity and that the lasting legacy of Lancelot ‘Capability’ Brown helped shape Middleton.

A new period of garden history was however just beginning and landscape gardens would never look the same again. The romanticism movement in art was inspiring landscape architects to search for the sublime and picturesque, criticism of Brown’s legacy increased in volume and Humphry Repton soon grasped the mantle as the outstanding landscape architect of the time. Repton was a thorough planner and author, his records and books were widely read by those with an interest in estates, gardens and horticulture. His views were difficult to ignore. The unique landscape character of Middleton epitomises this juncture. Reptonian and romantic influences were documented in Thomas Hornor’s artistic record of the estate from 1815. There was a willingness for Middleton to be modern, a contemporary landscape and an openness to change. The Regency was a short period of history, but landscape architecture made an important pivot during this time which would shape how we manage parklands and create gardens today. Many of the features found at the Botanic Garden are rare and historically significant. The Botanic Garden is listed on the Cadw/ICOMOS Register of Parks and Gardens of Special Historic Interest in Wales (Grade II*) recognising its importance.

Trees were used in landscape gardens to frame views, delineate space, to be admired in small clumps or as individual specimens. Due to their long life, trees often transcend periods of history, owners and land uses, leaving a heritable legacy for the future. Some of the trees planted during the Regency period remain today as veterans of the woods and parkland. Much of the Afon Gwynon Woodland is dominated by oak (Quercus spp.), beech (Fagus sylvatica) and the designed parkland was planted with a diverse array of native and naturalised trees. Hornbeams (Carpinus betulus), sweet chestnut (Castanea sativa), holly (Ilex aquifolium) and hazel (Corylus avellana) have all been used to create the impression of a timeless estate. As part of the Regency Restoration project many of the parkland clumps and belts were recreated with extensive new plantings. The saplings are only starting to establish but will shape the landscape for many years to come.

Conifers were also used in historic planting schemes, commonly favoured due to their evergreen and fast-growing nature. Scots pine (Pinus slyvestris) and silver fir (Abies alba) were used in the estate. Few conifer specimens remain due to the timber harvesting conducted in the late 1930s but the ones that were spared are now sizeable specimens, shaped by time, prevailing winds and their environment.

The landscape has continued to evolve after completion of the project. The prevalence of Ash Dieback (Hymenoscyphus fraxineus) has had a considerable impact on the Nature Reserve’s ash trees. The issue is proactively being managed, with selective thinning and felling. Some ash trees are resistant to the disease and will be unaffected, but most will be lost. The Botanic Garden will continue to restore the historic character of the parkland by replanting. Alternative tree species associated with the plant communities present or history of the estate will be utilised to create varied woodlands and copses, bio-diverse habitats and enriching environments for your enjoyment and wellbeing.

The parklands of landscape gardens were purposefully smooth, gently undulating and serene. At Middleton, cattle and sheep lightly grazed large and undivided pastures helping to achieve the desired effect of rolling green fields. Occasional clumps and belts of parkland trees were purposely placed for interest and shade. Only green drives, peripheral circuit walks and lakes enclosed the open parkland documented by Horner in 1815.  The Regency Restoration project restored much of the parkland’s character through reinstatement of the lakes, tree planting, removal of field boundaries and the continued grazing of the pastures by cattle and sheep.

Society, ideologies and priorities change with time. During the Regency period parklands were a canvas to exercise control of landscapes and nature for artistic expression. An idealised version of the countryside for pleasure. In current times, our knowledge and understanding of the natural world has developed considerably and we better understand the need to safeguard and nurture biodiversity. Land is increasingly managed with conservation and ecological resilience in mind. The pastures of the Nature Reserve are therefore not closely grazed swards of short grass, but diverse and complex communities of grassland plants and fungi. Organic farming (certified by the Soil Association), targeted grazing and applied conservation practices are all used to help flora and fauna flourish. Since the National Nature Reserve status was awarded in 2008, the Regency-period parklands have been transformed by regenerative farming and the actions of staff and volunteers, working to support the Botanic Garden’s mission, into a valuable resource for biodiversity conservation.